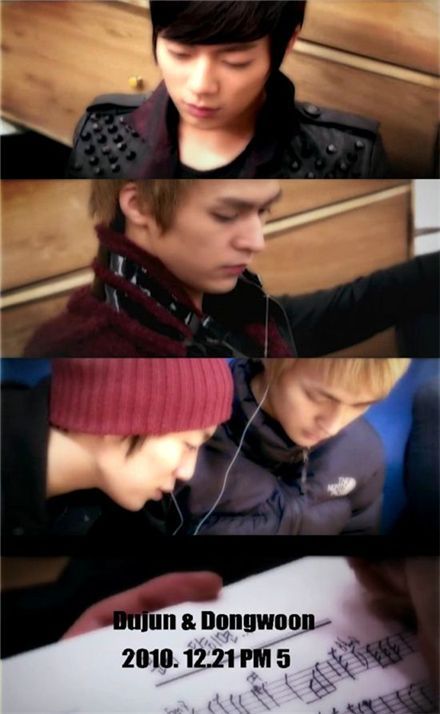 An official from their agency Cube Entertainment told 10Asia over the phone, "The first track from their upcoming album 'My Story' is the ballad whose translated title is 'When the Door Closes' from Yoon Doo-joon and Dong-woon. The other songs from other units Hyun-seung and Lee Gi-kwang and Yo-seop and Jun-hyung will be unveiled later this week".

She continued to explain that "When the Door Closes" will be released on various online music websites later on today while the preview video featuring the two boys singing the tune during their first concert will be uploaded onto their official fan webpage and their YouTube channel.

The duo units first revealed their new songs during their concert "WELCOME TO BEAST AIRLINE" on December 12, while Yoon Doo-joon and Dong-woon, who helped compose the song, played the piano with their performance of "When the Door Closes".

"My Story", featuring a total of four tracks including the soft version of "Lights Go On Again", a song from the boy's fourth mini-album of the same name, will be revealed on Friday.

Known as one of the hottest boy bands, BEAST made their debut in October 2009 with their first mini-album "BEAST IS THE B2ST", producing hit songs such as "Bad Girl", "Shock", Easy" and "Soom".

The boys recently returned to the local music scene with their new album "Lights Go On Again" and have been promoting its title track "Beautiful" which has topped various online music charts since its release in early November.

"1st track from BEAST duo unit album revealed "
by HanCinema is licensed under a Creative Commons Attribution-Share Alike 3.0 Unported License.
Based on a work from this source