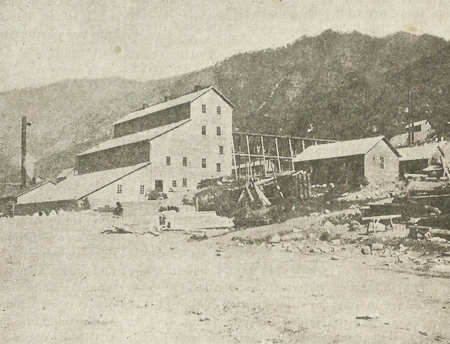 A gold mine in Unsan, above, was operated by foreigners and the below photo shows Korean placer miners taking a rest.

During the late 19th and early 20th centuries, Korea experienced a gold rush. Foreign as well as Korean gold miners sought concessions throughout the peninsula - especially in what is now North Korea.

Chief among these gold mines were those owned by the Americans, British, French and Japanese.

Some were mere flashes in the pan - quickly established and equally quick to fail - but others were quite uccessful and remained in operation until the late 1930s when they were all bought out by Japanese mining syndicates.

One such Western mining company was the Chosen Corp. Ltd. (CCL), a British concern that owned several gold mines throughout Korea including Yongbyon and Taiyudong (the French gold mines). Much about CCL's daily operations is unknown and would probably interest few readers but the stories of two of CCL's directors might.

Martin Coles Harman, one of the first directors of CCL, was an infamous eccentric who first gained the public's attention when, in 1924, he purchased Lundy - a small island off the coast of England - and then audaciously declared himself monarch of the new island kingdom.

While the British government was somewhat tolerant of his self-proclamation, its patience ran out when Harman began to mint his own currency.

He was slapped with a small fine and ordered to cease coining.

For several years, Harman managed to maintain a relatively low profile but in 1933 he was convicted of misappropriating funds from CCL and confined for 18 months at Wormwood Scrubs prison for his indiscretions. The scandal that followed caused the stock prices of CCL to plummet and Harman eventually lost control to Serge Rubenstein.

Rubenstein is arguably one of the most notorious Westerners to do business in Korea prior to World War II. His history is one that is woven into the fabric of exaggeration, mysticism and outright lies. He was born in St. Petersburg in 1908 and his father, Dmitri, served as one of Grigory E. Rasputin's financiers. 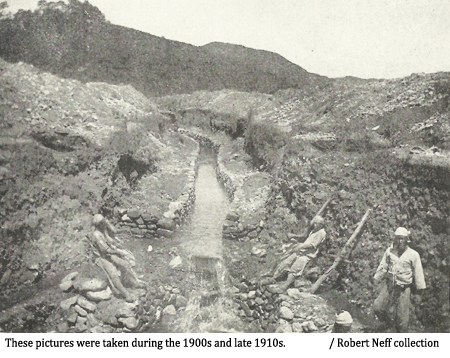 After the death of Rasputin and the beginning of the Russian revolution, the Rubensteins fled Russia to Finland. One source claims they were captured by red soldiers in Crimea and only managed to escape execution with a bribe of 1.5 million rubles while another claims they arrived in Finland penniless except for the family jewelry sewn into young Rubenstein's jacket. They then made their way to Vienna.

According to Rubenstein, on his 15th birthday he asked his parents to send him to Dr. Alfred Adler, a famous psychologist in Vienna, because he was concerned about his inferiority complex.

"The doctor offered to cure his neurosis, but added: 'Do you want that? You'll just be an ordinary person. The way you are now, you'll be driven by ambition and desires'. Serge said he decided to remain neurotic".

When Rubenstein was 18, he attended Cambridge University and graduated in only two years with high honors. In 1932, at the age of 23, he was running Paris' Bangue Franco Asiatique and began buying up CCL stock after Harmon's conviction in 1933. In addition to his speculating he was also dabbling in French politics and the money market.

In 1935, the French government under Premier Pierre Laval ran him out of the country for selling francs short. He made nearly three million francs ($210,000) in profit. Rubenstein arrogantly suggested that it wasn't his financial prowess that had angered Laval but rather his sexual prowess. Rubenstein had apparently been dallying with Laval's mistress - a French marquis.

After his ouster from France, Rubenstein made his way to Asia to examine CCL's Far Eastern properties. His travels in Asia were described as mysterious business plots likened to "Soviet caviar merchants who moved between Tokyo and Shanghai".

While in Seoul, he stayed in room 206 (the royal suite) at the Choson Hotel, which indicates just how highly the Japanese regarded him. Except for nobility, very few non-Japanese were ever allowed the privilege of staying in room 206. Undoubtedly, the Japanese were hoping he would invest a large part of his money in Korea.

But Rubenstein was extremely perceptive and was always planning ahead.

During one of his trips to Shanghai, he applied for a Portuguese passport claiming that he was the bastard result of a premarital liaison between his mother, a Portuguese citizen (she was not) and his father, and he was therefore entitled to citizenship under a Portuguese law protecting the children of natives".

Apparently $2,000 made his story that much more believable and he was a granted a passport.

Following the Marco Polo Bridge incident in 1937, it became apparent to him that CCL's Far Eastern properties were in danger so he sold them to a Japanese syndicate for $1.7 million. Japanese law prevented the export of large sums of money but Rubenstein bribed a Japanese official to allow him to withdraw $1 million worth of 100-yen notes. He then, depending on the account, either smuggled the money out of Yokohama aboard a ship bound for Honolulu wrapped in an obi or in cardboard cylinders used to wrap silk for export. He was either assisted by a Polish friend or two beautiful women.

Once in Hawaii, Rubenstein immediately began to sell the yen notes at a great discount. According to one newspaper, over the next couple of years, 100-yen notes sold at a discount in Honolulu and in San Francisco waterfront restaurants until the Japanese outlawed them.

Not only did he use his Portuguese passport to illegally enter the United States, he also used it to open bank accounts under the alias Serge Manuel de Rovello and deposit embezzled money from CCL. One angry stockholder declared Rubenstein's disposal of CCL's property "was conceived in iniquity and born in sin".

Rubenstein was eventually forced to return nearly $2.25 million of the $6 million he had embezzled. But it wasn't the embezzling that eventually sent him to jail - it was draft dodging.

During World War II, Rubenstein managed to avoid the draft on 15 occasions with his Portuguese passport and claiming that his induction into the military would leave his family without financial support.

Found guilty in 1949, he served two years at Lewisburg Penitentiary and was fined $50,000. He lost not only his money but his wife. She promptly sued for divorce and was granted custody of their two children.

Following his release from prison, Rubenstein became a voracious womanizer. He surrounded himself with beautiful, tall women and provided them with keys to his luxurious apartment.

Whenever he grew disenchanted with them he merely cast them off and changed the locks on his doors. "He used and discarded beautiful women as other men toss away cigarettes", declared one reporter.

He "wanted desperately to be accepted" but the American public despised him for his draft dodging. People on the streets cursed and insulted him and the clubs that once fawned over his patronage now denied him entrance.

The American government was just as unforgiving - the U.S. Immigration authorities began proceedings to have him deported. Defiantly, Rubenstein declared: "I love America even if it doesn't love me!" But death, rather than deportation, was his fate.

On Jan. 27, 1955, Rubenstein was discovered dead in his townhouse. His arms and legs bound with the cords from his Venetian blinds and his face wrapped in tape, he died a horrific death from suffocation. The police promptly began an investigation but the number of possible suspects was enormous as Rubenstein had "made enemies in legions".

One newspaper reporter quipped that the police had "narrowed the list of suspects down to 10,000". A police official did admit that there were hundreds of suspects, each with their own motives, and "they all wanted him dead".

Rubenstein died as he lived - violently, ruthlessly and mysteriously. His murder remains unsolved.

The writer is an expert on Korean history. Living in Seoul, he contributes articles to The Korea Times.

"2 notorious directors of Chosen mining firm"
by HanCinema is licensed under a Creative Commons Attribution-Share Alike 3.0 Unported License.
Based on a work from this source