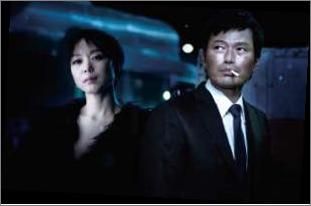 A ruthless debt collector TAE Geon-ho (Jung Jae-young) chases after a mysterious woman CHA Ha-yeon (Jeon Do-yeon), to do his job as usual. Ha-yeon is a financial fraud who is just released from prison. Betrayed by a friend before, she lures Geon-ho into her plan for revenge, promising him big money immediately. In urgent need of big money, Geonho accepts Ha-yeon's offer and Ha-yeon is excited about the thought of getting her money back.

Claiming to be humane action film, "Countdown" has chosen financial fraud as its subject, an unusual choice for a Korean film. Albeit a dark crime movie, its humane side is hidden in the ending. The movie talks of coexistence and betrayal of a couple, using each other for the sole target 'money'. The twist where the two go on the verge of their lives that comes in the end will surely be an impressive point of the film.

The new side of Jeon Do-yeon, winner of the Best Actress Awards at 2007 Cannes Film Festival for her performance in Secret Sunshine , stands out. She tries to move away from her image as an art film actress that became concrete since Secret Sunshine . While acting as a beautiful fraud who's full of lies, she also shows off her femme fatale features. Jung Jae-young who was awarded Best Actor from Blue Dragon Awards last year for "Moss" reveals a cold yet kind side of him. The two actors had collaborated in Ryoo Seung-wan's 2002 action film "No Blood, No tears", getting back together on screen after 9 years. No Blood, No tears and "Countdown" share the similarities of being a crime film. Meanwhile "Countdown" is a film company Bom's comeback piece in genre film after its heydays of the early millennium.

Much is expected of "Countdown" , as a work of producer Oh Jeong-wan, returning to a popular genre film once again unveiling her senses and perseverance. With investment and distribution by Sidus FNH, the shooting will finish up in early May and be premiered in the Fall.