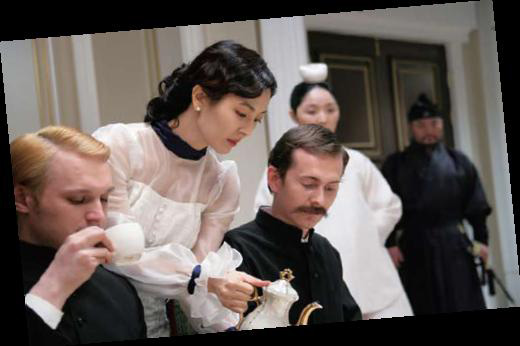 It's the end of 19th century, and Gojong, King of Josoen flees to the Russian legation to save himself from foreign threats. The king comes into contact with western culture during his stay there, and tastes coffee for the first time in his life. After he returns to the palace, Gojong continues to enjoy coffee, while an assassination attempt takes place to kill the king by poisoning his coffee to prevent him from establishing the Korean Empire.

"Gabi" is a story about turn-of-the-century turmoil told through the genre of mellow, thriller and spy films. Adapted from Kim Tak-hwan's novel Noseoa "Gabi" , a tragic love story and intelligence action of Joseon's first woman barista tangled with a Russian spy and Emperor Gojong form the main storyline. Kim Tak-hwan is also the writer of "Secret of Monument for Virtuous Lady", which was made into the movie "Detective K", the biggest Korean film hit during the first quarter that earned 4 million viewers since its release in February. The Title of the novel 'Noseoa "Gabi"' means Russian coffee. It is interesting how the film connects facts with fiction, such a setting as the first barista of Joseon. The scene where Gojong takes his first sip of coffee, something very new at the time, and the Russian legation and steam locomotive scenes recreated by computer graphics will be quite a spectacle to watch.

Director Jang Yoon-hyeon was the pioneer of early Korean Indie films, leading the way with "The Night Before Strike" (1990) and announced at the start of the Korean New Wave in the late 1990s with "The Contact" (1997) and "Tell Me Something" (1999). With "Gabi" , Jang intends to jump back up from his slump of the last century, when he consecutively failed with "Some" and "Hwang Jin Yi". When asked why he took the job, director Jang answers "The original novel was such an interesting piece". He says "At first I became interested out of curiosity, wanting to know the first person who made coffee in Korea. Yet the more I researched about it, the more I learned new things, which I added onto thescreenplay". He also adds "So many spectacles will appear on screen, making one wonder did all that really exist during that time".

Chungmuro's eyes are on Jang, watching whether he will overcome his last two misfortunes and make a successful return. The film will be distributed by Cinema Service, an enterprise of Kang Woo-seok, the magic hands of Chungmuro.
Once the biggest distributor in the business, it is true Cinema Service is having some difficulties after the recent films company distributed didn't do too well. Much attention is given to whether '"Gabi"' will be a breakthrough for Cinema Service. Also it is interesting to predict whether film adapted from Kim Tak-hwan's novel will make a hit one after another.

The film stars Hanryu star Joo Jin-mo ("A Frozen Flower"), a great performer Park Hee-soon ("Seven Days") as well as Yoo Sun ("Moss") and Kim So-yeon ("IRIS"). Joo plays a first class sniper Ilyich of Russian crooks hovering around Gojong, and Kim So-yeon, Tanya the barista who serves coffee to the Emperor. Making her screen debut with "Change" (1997), except for "Seven Swords" (2005), a TSUI Hark film made together by Korea and China, Kim's works have been mostly on TV. "Gabi" will make her return to the big screen after 15 years. The mysterious woman, queen of the social circle with
two names, Bae Jeong-ja in Korean and Sadako in Japanese, played by Yoo Sun. Production Company Ocean Films commented "The film stays almost true to history with about 30% of it being fiction". Ilyich and Tanya are fictional while Bae is a person who actually existed. The film started in at the end of March and shooting will continue until late June. Total production cost is estimated to be about US$6.5 million (7 billion KRW), and the film is scheduled to be released at the end the end of the year.

"[20 KOREAN FILMS TO LOOK OUT FOR SECOND HALF OF 2011] "Gabi""
by HanCinema is licensed under a Creative Commons Attribution-Share Alike 3.0 Unported License.
Based on a work from this source