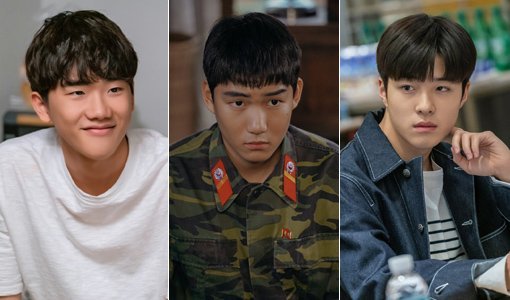 Some refuse to remain as child actors. It doesn't matter that they are in their teens. Actors born in the year 2000 who have become main stars in dramas and movies are coming. They have steady acting skills that are nearly as good as grown-up actors and their attitude towards acting makes them 'rising stars'.

Ahn Ji-ho (16), Tang Joon-sang (17) and Nam Da-reum (18) were born after the year 2000 and are now teenagers. However, they aren't 'teenage stars' that appeared out of nowhere. They've been in this industry for as much as 10 years and through their experience on stage, they have been acknowledged for their talents.

Ahn Ji-ho is currently starring in the SBS drama "Nobody Knows", which is on the verge of surpassing 10%, as Kim Seo-hyung's counter role. He plays a young boy with a pure and innocent soul alongside charismatic detective Kim Seo-hyung. The friendship between them with a wide age gap could have looked awkward, but thanks to Ahn Ji-ho's proficient acting, the drama is rising in viewership with every episode.

Nam Da-reum debuted in 2009 with the KBS 2TV drama "Boys over Flowers" and has been through various genres in the last 11 years. The same goes for Tang Joon-sang. Meanwhile, Geum Eun-dong, who played a North Korean soldier in the tvN drama "Crash Landing on You" with Hyun Bin and Son Ye-jin, was only noticed recently, but he's been at this for 10 years. He was active in theater since the 2010 "Billie Elliot", which is famous for its competitiveness.

Each of them have different individualities and that's what makes them so looked forward to.

Tang Joon-sang is proficient in acting thanks to his singing and dancing foundation from numerous musicals. He starred in the movie "The King's Letters" with Song Kang-ho and Park Hae-il and the performance of the Buddhist scriptures in Sanskrit is considered one of his greatest scenes.

A common factor they share is that they are acting out various stories with grown-up actors. Nam Da-reum is starring in the tracking thriller "The 8th Night" with Lee Sung-min, and "Sinkhole", in which he acted alongside Cha Seung-won, is also looking forward to release.