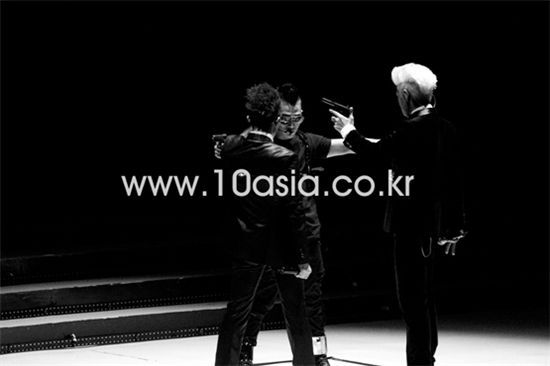 "Muscle!" was what a fan from Hong Kong said as soon as she was asked what she finds most attractive about boy band 2PM. And when a girl, who would scream outright just by the mention of Nichkhun's name, was asked whose muscles she thinks are the best, without hesitation she blurted out "Ok Taecyeon!" Numerous female fans from around Asia who like Korean idol stars for specific images crowded the lobby of the Venetian Macao Resort Hotel in Macao where the red carpet event for the 2010 Mnet Asia Music Awards (MAMA) was held. But the cheering was not reserved only for good looking guys. A 19-year-old Chinese girl, who introduced herself as a big fan of Big Bang and in love with all its members, went equally wild at the sight of girl group 2NE1 and imitated the "Abracadabra" dance by Brown Eyed Girls saying they were the group outside YG Family that she loves. Hence in such an atmosphere, it may be only natural that these fans are interested not only in the Korean stars but also Korean culture. This may not accurately represent the whole but it is worthy to note that two out of five teams interviewed tried to convey their thoughts in Korean by roughly uttering the phrase, "I can speak Korean" in actual Korean. One Chinese fan in particular asked about the guy on the red carpet next to singer Son Ho-young who was hosting the show. When given the answer John Park, the fan only wondered for a few seconds before exclaiming a few seconds later "Oh, from 'SuperstarK!'" boasting her vast knowledge in Korean entertainment which was wide enough to cover a singing competition from one of the cable channels. So what is it that has made them into such fanatic fans of the Hallyu?

Like it or not, the fact that the 2010 MAMA was hosted in Macau will continue to remain controversial. Mnet explained that hosting the event outside Korea was a step necessary to turn MAMA into a music award that represents Asia in the long run. An equally convincing argument is that had the show not been held overseas and on a day a televised music program did not air, even more singers and bands in Korea could have attended. However, watching the 15,000-seat Cotai Arena packed with fans from China, Hong Kong and Macao chanting girl group 2NE1's name when they stepped onto stage to present an award was a spectacle that can rarely be seen in Korea. Of course, they did not applaud for all the Korean singers that appeared that day but it showed the difference in interest they have overseas when fans went wild over Secret and G.NA who were nominees for best new artist but just silently stared at Nine Muses. Their cry of joy went louder when miss A took the prize for best new artist and even louder when the member Jia took the mic to give her acceptance speech. But of course, there was another reason to it. The large display screen behind the girls had focused on Nickhun's face at that very moment.

But not all the celebrities that have been driving Asian fans of the Hallyu wild got captured on the screen live. In fact quite a few groups from SM Entertainment and other major agencies declined to take part in this year's MAMA, leaving the year-end ceremony with even less singers than its weekly Mnet M! CountDown show. But it would be too rude to brand the 2010 MAMA as a half-failure when there were teams that went all out to give their best on the stage. No performance was quite as overwhelming as the one put on by Big Bang and Lee Hyo-ri back at the 2008 Mnet KM Music Festival (MKMF) but still quite interesting as miss A displayed unique and individual performances in the intro for their song and boy band 2PM incorporated interesting mime moves into their choreography. Then there was 2NE1 who performed "Follow Me" and "Can't Nobody" with a mystic aura and performances by aritst like Tiger JK and DJ DOC who know how to have fun on stage. Together, they proved how much infinite energy they can be emitted at such a show. And of course there were a few disappointments. Huh Gak's stage in which he sang to Dr. Jekyll and Mr. Hyde's "This is the moment" made him seem to resemble Paul Potts too much and Chinese girl group I Me's performance seemed to be limited to being a simple self-introduction. Aside from the duet by Korea's Gummy and China's Zhang Jie, it was hard to see any other form of interesting collaboration between music bands from different countries and styles. So it was Big Bang who filled in the spaces.

Thanks to their 'killer versus killer' concept, the performance by T.O.P. (Choi Seung-hyun), G-Dragon and Taeyang was more like a collaboration between three high-class singers rather than two members missing from five-member boy band Big Bang. While Taeyang excelled in his dance and singing technique, T.O.P.(Choi Seung-hyun) matched it with his rough rap and expressionless face which only heightened his charisma. G-Dragon, for his part, made his presence known with "GDGD baby baby" song that showed off his easy-going self. If the performance of those three boys marked the most imaginable highlight of the 2010 MAMA, the surprise appearance of Wonder Girls was probably the hidden card MAMA had held to create the performance beyond one's imagination. It may be difficult to give an answer on whether it would have been as effective as having Girls' Generation make a surprise appearance. But after top bands after top bands declined to show up for the ceremony leaving everything up to only YG Entertainment and JYP Entertainment to handle, the sudden appearance of the Wonder Girls which led Asian fans to sing "Nobody" in unison was probably not the best choice but the best option they had.

If you still feel that the MAMA ceremony is lacking and not in terms of the number of artists who took part, it may come from the awards themselves. This is not to criticize that singers from YG and JYP Family took the bulk of the awards. The awarding process would have looked somewhat more fair had the camera also covered scenes such as CNBlue receiving the Best New Male Artist, 2AM winning the Best Vocal Performance and BoA receiving the Best Female Artist. But more than that one should remember that awards ceremony are not meant to squander awards to everyone. It only makes sense for films like "Lord of the Rings" to take most of the honors in Academy Awards. Unfortunately there was not such a blockbuster in the music scene for this year, did groups 2PM, 2NE1 and miss A actually showed that much of an lead from other bands? Perhaps 2NE1 deserves its award for its album "To Anyone" that produced not one but three hit songs in the era of digital singles. But it is still uncertain on whether that was good enough to lead to their best artist of the year win. Not that the awards ceremony would have been any more fair had Girls' Generation attended. The true authority of the awards ceremony comes from long struggles against limitations in judging, suspicions from the public as well as other trials and errors before settling down with a standard of its own. This is even more important than its title that it is an Asian music award and that it is its first attempt at having the festivity held overseas. How will the 2010 MAMA be remembered after it goes through all kinds of controversies? Will it truly be remembered as the first step of becoming Asia's representative music awards as it dreams of? If so, I might let go of UV's elimination in section for music video award.

"2010 Mnet Asia Music Awards (MAMA): Live in Macao "
by HanCinema is licensed under a Creative Commons Attribution-Share Alike 3.0 Unported License.
Based on a work from this source