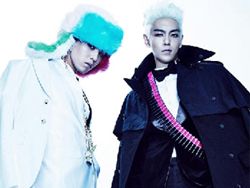 It's safe to say that 2010 was dominated by girl groups and female solo singers. Well, that trend may be coming to an end with the new year of 2011.

Already, two duos have been sweeping the music charts and music shows with their incomparable popularity: G-Dragon & TOP (Choi Seung-hyun) and TVXQ. G-Dragon & TOP (Choi Seung-hyun) are members of what's arguably one of the most popular boy groups in Korean music -- Big Bang. The only group that has been able to rival Big Bang at the time of their peak was maybe TVXQ. After the trio JYJ split off as their own entity, the two remaining members are pushing on as a duo now. Perfect timing to give G-Dragon & TOP (Choi Seung-hyun) a little friendly competition! On top of that, the six-membered group BEAST has been split into three duos: Yoseop & Junhyung with the song "Thanks To", Hyunseung & Lee Gi-kwang with the song "Let It Snow", and Yoon Doo-joon & Dongwoon with the song "When The Door Shuts".

In response to this, entertainment related sources from SM Entertainment and YG Entertainment have said that there are already talks that perhaps male duos are the next big thing in kpop.

So what is the power behind the concept of just two male idol stars? BEAST representatives explained, "There are limits to showing off the talents of all the members when promoting as a six-membered group. When performing as a two-membered team, there's more room to show off each of the members' vocal abilities and unique sound. These may not be songs from their [BEAST's] official album, but through their promotions as duos, the fans have been able to get a taste of what each member brings. Also, duet performances can offer something different musically compared to solo performances".

There are some downsides to duos though. Dance and choreography don't look as visually pleasing compared to larger group performances. Also, because the spotlight needs to be shared, it's not as focused and powerful as solo performances.

Only time will tell whether the positive points will overpower the negative points!