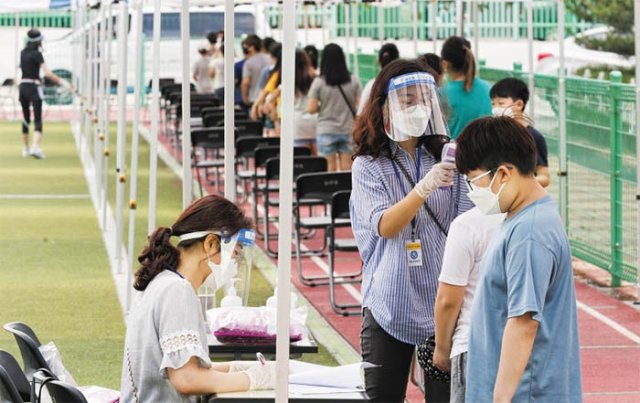 Children wait to test for coronavirus at a makeshift facility at an elementary school in Seoul on Sunday.

Signs of a second coronavirus wave are looming large around the world as the number of infections surged to 10 million on Sunday.

Korea is not an exception with fresh clusters of cases occurring, especially in the Seoul metropolitan area.

As of early Monday, the infection tally reached 12,757, up 42 from the previous day, while the death toll remained at 282.

The government has said that it will strengthen social distancing again if the daily average of new cases exceeds 50 for two weeks, which means a ban on religious services, weddings and other events where more than 50 people gather indoors. On average 43.1 new cases occurred each day over the last two weeks.

Health authorities are on the alert as the number of untraceable infections has also risen. Their rate surpassed 10 percent on June 15 and increased to 11.3 percent on Sunday.

Authorities believe that the medical system could handle anything below 50 new cases a day and a rate of untraceable infections under five percent.

"2nd Coronavirus Wave Looms"
by HanCinema is licensed under a Creative Commons Attribution-Share Alike 3.0 Unported License.
Based on a work from this source