2PM, 2AM to film documentary in Japan 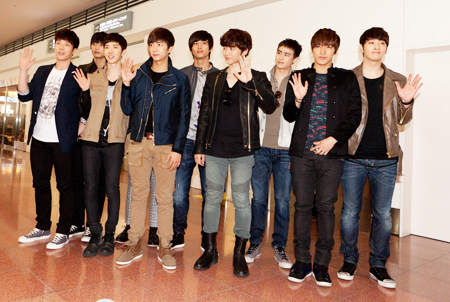 Members of 2PM and 2AM (Courtesy of JYP Entertainment)

K-pop groups 2PM and 2AM will film a documentary on their concerts in Japan, which will hit theaters in June.

"Beyond the OneDay ― Story of 2PM & 2AM" will feature backstage footage from JYP Nation in 2011 last summer, when 10 members of the two groups held a joint performance for the first time. It will also show the boy bands' performances and what they do in their free time, offering a sneak peek into the life of K-pop singers.

2PM's agency JYP Entertainment, said more than 1,500 fans gathered at the airport to greet them. "It is the largest number of K-pop fans to come to the airport, proving 2PM and 2AM's popularity in Japan", a JYP official said.

The two groups made their debut through Mnet's "Hot Blood", which documented their training process and how the groups were created. The two groups have contrasting images ― 2PM sings powerful dance numbers while 2AM offers more soft ballads. Later 2AM transferred to Big Hit Entertainment, but the bands continue to share a strong bond as brother groups.

"2PM and 2AM were trained together before their debut. But since we are both busy now, we don't spend much time together and we are grateful we can film a documentary with colleagues who we spent six years together with", members of 2PM said in a statement.

"We hope to share the close relationships that 2AM and 2PM have through this movie, as well as what we feel and think when we are not onstage", 2AM said.

The documentary will be in theaters nationwide in Japan, including Toho Cinemas Roppongi Hills, from June 30.

"2PM, 2AM to film documentary in Japan"
by HanCinema is licensed under a Creative Commons Attribution-Share Alike 3.0 Unported License.
Based on a work from this source