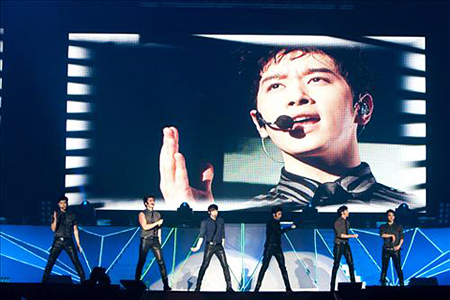 The idol group 2PM successfully finished their Asian concert tour entitled "Hands Up" in Thailand, their agency JYP Entertainment said on February 20. According to JYP, 2PM held their first solo concert in Thailand at Impact Arena on February 18, and around 9,000 audience members came to their concert.

2PM sang their hit songs including the title song of their second album entitled "Hands Up" during the concert. Group member Nichkhun, who hails from Thailand, received a standing ovation when singing the song of a Thai singer named Bird. 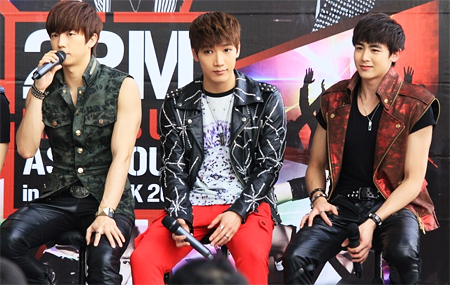 The audience enthusiastically cheered for the group members during the concert that lasted for more than two hours. The fans produced a special video to deliver their appreciation for 2PM, who had donated for people in Thailand when there was a huge flood last year, and the group members shed tears after watching the video. 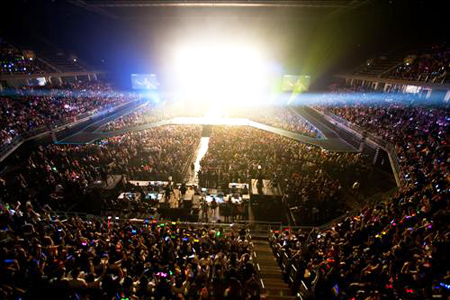 In addition, JYP revealed that when 2PM held the fan meeting entitled "High-Touch" on February 17 at Siam Center Square, around 3,000 audience members came to the venue, and when they held a press conference on the same day at Impact Arena, major news media outlets came to the venue and competed to cover the story. During the press conference, 2PM said that they will donate a part of the profits from the concert in Thailand to the Thai Red Cross.

2PM will continue their Asian concert tour in Nanjing on February and in Hong Kong on March 10.

"2PM's First Concert in Thailand Attracts 9,000 Audience Members"
by HanCinema is licensed under a Creative Commons Attribution-Share Alike 3.0 Unported License.
Based on a work from this source