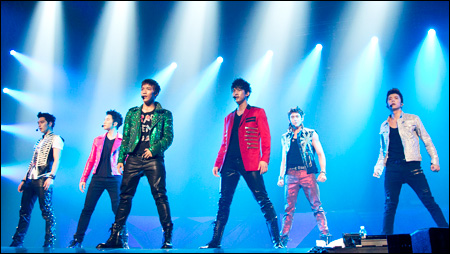 2PM has kicked off "Hands Up Asia Tour" which was held at Jamsil Indoor Stadium in Seoul on Friday and Saturday. / Courtesy of JYP Entertainment

The six members dominated the stage for more than two hours, almost non-stop. Sharing in the excitement with their fans the K-pop sensation reveled being onstage.

"We are glad to be a part of the K-pop boom sweeping Asia and ready to show the music of 2PM to our fans", band member Ok Taecyeon said during a press conference held prior to the concert.

The two concerts drew an audience of about 14,000 and 2PM's agency JYP Entertainment calculated that approximately one third of the audience came from overseas. Some fans held colorful glow sticks, almost like a rainbow inside the stadium.

Jun-ho said, their producer Park Jin-young advised them to stick to 2PM's basics. "He also gave us advice individually. He told me to relax a bit, while Chan-sung needs to be calmer", Jun-ho said.

The concert kicked off with "HOT", a number written by Jun-su. They continued with hit songs such as "Electricity" and "Hands Up", making the audience go wild. While singing "Tired of Waiting", the members stopped for some 10 seconds to prepare the choreography, and made the cheering fans "wait".

The members were not shy during the concert. They dashed to the front of the stage to greet as many fans up close and even flew high above to the third floor of the stadium on wires.

Each member also paired up or gave solo performances ― Jun-ho and Woo-young danced together to the song "With Me", while Jun-su presented "Alive", a song written by him. Nichkhun and Ok Taecyeon sang "My Valentine" together. The atmosphere was soon reversed when they followed with "Itaewon Freedom" with special guest UV. Chan-sung chose to add something to the music and performed a smooth sword-fighting sequence.

The latter half of the concert was filled with the group's popular numbers such as "10 Points Out of 10 Points", "Again and Again", "Don't Stop Can't Stop" and Heartbeat.

In the slightly belated encore, Ok Taecyeon appeared on stage with a slight limp, helped by other members.

Despite wearing a knee brace at the press conference and admitting that he was not fully recovered Ok Taecyeon danced to powerful choreography throughout the concert. It might have affected his injury but he was strong enough to continue singing and dancing "I'm Your Man", the group's Japanese single.

The group will continue their Asia tour to Taiwan on Oct. 8, Indonesia on Nov. 11, Singapore on Nov. 19, Malaysia on Nov. 25, Philippines on Nov. 27 and Beijing in November and Japan in December.

Band member Nichkhun hails from Thailand, but Bangkok is not included in the current schedule yet. He still hopes he can visit his home country and have a concert there but until then he said, "I hope many Thai fans come to our concert here and I also wish that we meet fans from every country".

More concert dates for early 2012 will be announced later.