2PM to tour Japan in December 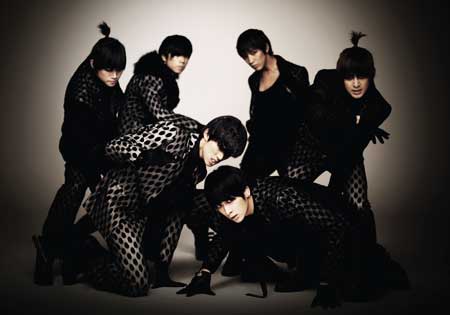 K-pop group 2PM will give concerts across four Japanese cities in December.

The band will kick off the tour with concerts on Dec. 5 and 6 in Osaka-jo Hall, Osaka and will continue to give shows at Gaishi Hall, Nagoya, Dec. 8 and Saitama Super Arena on Dec. 14. The tour will wrap up at Marine Messe, Fukuoka, Dec. 17.

The five concerts are expected to draw an estimated 70,000 fans.

The six-member boy band attracted some 25,000 fans in the neighboring Asian country for its first showcase last December. It has been touring extensively across other countries in the region, and is currently giving concerts across Taiwan, Indonesia, Singapore, Malaysia and China for the "2PM Hands Up Asia Tour".

Members of 2PM also recently donated some of their personal items for a fundraising project to help needy African children. The event, titled "Rainbow Project", will be held from Sept. 17 to 25 at J-Bug Museum located by Ttukseom, Seoul.

"2PM to tour Japan in December"
by HanCinema is licensed under a Creative Commons Attribution-Share Alike 3.0 Unported License.
Based on a work from this source