3 battles on Mondays and Tuesdays 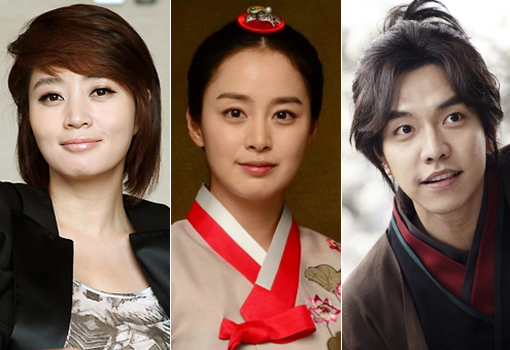 Kim Hye-soo "I didn't watch the original on purpose"

A new battle is staring between the three main broadcasting companies.

KBS 2TV "The Queen of Office", MBC "Gu Family Book" and SBS "Jang Ok-jeong" are the three and they share the common factor of having to jump over the past. "The Queen of Office" starts from the 'past' of being an 'original'. It is a remake of the Japanese NTV "Dignity of Dispatch" and is a romance drama based around Miss Kim who is a multi tasker.

Kim Hye-soo doesn't hide the fact that she's pressured by the original piece. She said, "I only watched the first episode of it not wanting to imitate it. I think my feelings of it are important. I am going to act it out exactly the way I saw it in the script".

"Jang Ok-jeong" Kim Tae-hee is the 9th Jang Hee-bin and is set to be compared to the previous Jang Hee-bins who are Kim Ji-mi, Nam Jeong-im, Youn Yuh-jung, Lee Mi-sook, Jeon In-hwa, Jeong Seong-kyeong, Kim Hye-soo and Lee So-yeon. How she differentiates herself from her seniors is the question.

If Jang Hee-bin has been drawn as the century's femme fatale, Kim Tae-hee is going to be more rational. She said once that she will create the character to be a woman who is in love with a man and boldly creating her way of life.

Lee Seung-gi has to deal the past of himself. "Gu Family Book" is about a gumiho man struggling to be a human. Lee Seung-gi takes on the role of Choi Kang-chi. Although different in characters, he has to make it seem different from the SBS drama, "My Girlfriend is a Gumiho" which he starred in with Shin Min-ah before.

A spokesperson said, "My Girlfriend is a Gumiho" was a modern drama and "Gu Family Book" is a historical martial arts drama so they are different in setting and genre".

"3 battles on Mondays and Tuesdays"
by HanCinema is licensed under a Creative Commons Attribution-Share Alike 3.0 Unported License.
Based on a work from this source