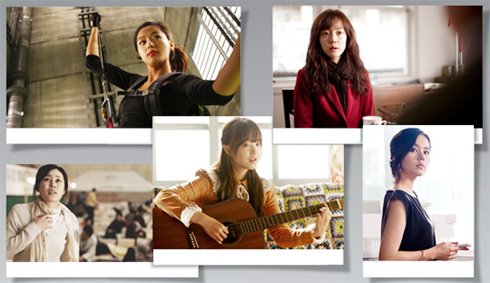 The entertainment industry is suffering from a shortage of actresses in their 20s. Most movies and dramas that recently gained a certain level of attention mostly featured actresses aged 30 or over.

Producers and filmmakers point out that it is difficult for them to find actresses in their 20s who are suitable for leading roles.

Of the 20 most popular movies released this year, Park Bo-young, who starred in "A Werewolf Boy", is the only female lead in this age group. Han Hyo-joo, who is also in her 20s, appeared in the movie "Masquerade", which drew more than 10 million viewers, but her role is greatly overshadowed by both the male lead Lee Byung-hun and supporting actor Ryu Seung-ryong.

The situation is not much different in the realm of TV dramas. The three most popular soaps this year all featured actresses in their 30s or older as the main cast -- "My Husband Got a Family", "The Sun and the Moon" and "A Gentleman's Dignity".

Kim Ho-sung, who runs a film production company, attributed the shortage to a lack of interest by aspiring young stars in their late teens and 20s. Instead of dreaming of becoming actresses, they often prefer to try their luck first as singers by capitalizing on their good looks and dancing skills.

"Once they rise to stardom as singers, they then think of building a career in acting. But due to their lack of acting skills or zeal, most prove unsuitable for leading roles", he added.

Others say most TV personalities in their 20s lack the patience and dedication required of a good actress. They claim that most female celebrities in this age group are more interested in short-time appearances on TV shows, fashion shows or other events as a way to get immediate attention, rather than shooting a film that requires a lot of time and hard work.

Others point to excessive plastic surgery as the reason why so many young actresses are unfit to star in movies. Last year, a film featuring several female stars in their 20s failed to draw moviegoers' attention because of their awkward and unnatural facial expressions due to the side effects of plastic surgery, critics say, which distracted spectators and left them feeling uncomfortable.

Myung Film's Shim Jae-myung cited an increase in the number of moviegoers in their 30s and over as another reason for the shortage of younger female stars. She also said audiences are increasingly gravitating toward films with male leads these days.

Film critic Jeon Chan-il echoed similar sentiments, saying that due to the shift in audience demographics, actresses in their 30s or over now have more chances to assume leading roles.

However, a number of experts voice a word of warning about the trend. If the shortage of younger leading ladies continues, they will end up getting replaced by older actresses in movies, leading to a lack of realism, they say.

The head of one entertainment agency urged film producers to lay a foundation for the future by investing more in younger aspiring actresses instead of clinging to older veterans with proven star power.

"30-Something Leading Ladies Take Over TV, Films"
by HanCinema is licensed under a Creative Commons Attribution-Share Alike 3.0 Unported License.
Based on a work from this source