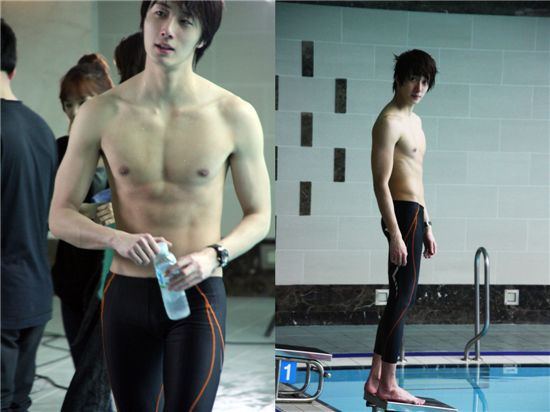 In the picture revealed on the 24th, he had an obvious six pack and a well balanced out body in a half body swim wear.

In contrast to his teenage-looking face, his body was enough to attract the attention of all the female fans.

A spokesperson for the drama said, "Jung Il-woo was coached by Korean representative swimmer Park Tae-hwan's coach for this swimming pool exposure scene. He had been adjusting his diet and exercising like no other for the past few weeks for this. Thankfully this scene turned out great. It's something to look forward to".

Those who have sent his pictures say, "Jung Il-woo's body was really tight", "My eyes have been cleansed", "Jung Il-woo is perfect with no flaw" and more.

Meanwhile, Jung Il-woo's abs can be seen in the fourth episode of "49 Days" coming on the 24th.

""49 Days" Jung Il-woo reveals well balanced hot body"
by HanCinema is licensed under a Creative Commons Attribution-Share Alike 3.0 Unported License.
Based on a work from this source