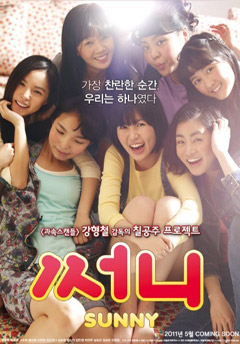 The film "Sunny - 2010" had attracted more than 6 million viewers on Sunday, two months after its release. The film portrays the friendship of women in their 40s.

According to the Korean Film Council, "Sunny - 2010" has lured 6.05 million spectators since its release on May 4, becoming the first Korean film to surpass the 6 million mark this year. "The Man From Nowhere", released on Aug. 4 last year, was the last Korean film to hit the mark.

The success of "Sunny - 2010" is being attributed to its appeal to a wide range of age groups. It tells the story of two women who remember their schooldays at the end of the 1980s and thus captivated both teenagers and those in their 20s as well as those in their 40s or older.

The key was that it managed to draw many viewers on weekdays thanks to its popularity among cinema-goers in their 40s or 50s. "Sunny - 2010" is currently the most viewed film in Korea among both Korean and foreign films, ahead of "Kung Fu Panda 2", which has been seen by 4.91 million people so far.