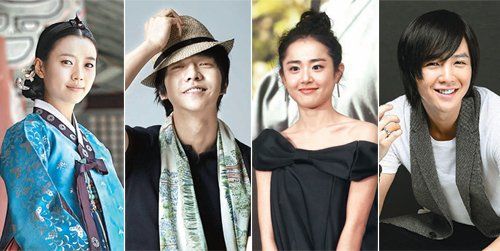 Lee Seung-gi, Han Hyo-joo… It is the era of 23 years-olds’! They are replacing main Actors/Actresses, who are mostly in their 40s.

Even sweeping CFs since they have high reliability on customers

What is a similarity between Lee Seung-gi, Jang Keun-suk, Moon Geun-young, Lee Min-ho, Joo Won, Choi Seung-hyun and Choi Si-won? They are stars who took main roles in home theatre and coincidently, they are all 23 years old! It is not a common thing for same-aged stars to create a main character level star group. Only Song Seung-heon, Cha Tae-hyun, Jang Hyuk and kwon Sang-woo were called ‘Year of Dragon’ Club but that is all.

The leader of 23 years old, Year of Rabbit is Lee Seung-gi.. From the model student image, from ‘My Girlfriend is Gumiho’ and entertainment programs, he swept all the important ads. Jin Hyeok PD, who placed Lee Seung-gi to stardom by ‘Shining Inheritance’, rated Lee Seung-gi as, ”Then or now, he (Lee Seung-gi) is honest and pure actor.” Director Kyung Wan-sik from Korea CM Tactic Research Centre, predicted, “His customer reliability reached a level of Go Hyun-jung and Ahn Sung-ki,” and added “He will have a long run if he does not make any public issue unlike MC Mong.”

Moon Geun-young and Jang Keun-suk, who started from child acting, recently casted for drama ‘Mary Stayed All Night’, as main actor/actress. Both of them praised for their change into adult actor/actress. Hong Seok-goo PD who directs this drama talked high of both of them, saying “If is hard to find actors other than them from similar who has both star quality and acting talent.”

Lee Min-ho got out from ‘pretty boy’ image by ‘Personal Preference’. He is now casted for the amin character in upcoming drama, ‘City Hunter’ and will play as ex-CIA agent. Han Hyo-joo, who plays the title role in MBC’s historical drama "Dong Yi", won the first place in a survey which asked for “Star who will look most polite”; this is her strong point since she has friendly image like “girl next door” Joo Won, who appeared as a rival of Tak-goo in ‘Bread, Love and Dreams’, Choi Si-won, who casted for “Oh! My Lady’ and “ATHENA’, Choi Seung-hyun who strongly expressed his emotion though his eyes in KBS’s ‘IRIS’ and movie ’71-Into the Fire’, are also the source of 87ers’ power.

“The reason for their popularity is due to Korean broadcast culture which production company only relied on proven stars,” said Jin Hyeok PD He explained, “Rookies’ gateway, such as one act play and open recruitment disappeared so actors with title role, who were in there 30’s, are now in their 40’s. Due to this reason, there has been a movement from Korean production world that production makers should appoint new actor/actress even with some risk. And that is why those 87ers’ could be successful in their acting career.”

Most stars, who were born in 1987, are male. This is because famous male stars who should be active right now such as Kim Nam-gil, Jo In-sung, Kim Rae-won, Kim Jae-won, Lee Joon-gi, Hyun Bin and Ju Ji-hoon are all serving in the military or soon going to, and people were looking for replacement of them while they are gone. Yoon Seok-jin, Korean Literature professor in Chung Nam University pointed out that most people who watch drama nowadays are women in their 20’s and 30’s, and added, “The broadcasting industry had to use young male actors in order to satisfy its main consumers.”

"87ers, 'Year of Rabbit Club', are replacing main roles in Home Theatre"
by HanCinema is licensed under a Creative Commons Attribution-Share Alike 3.0 Unported License.
Based on a work from this source