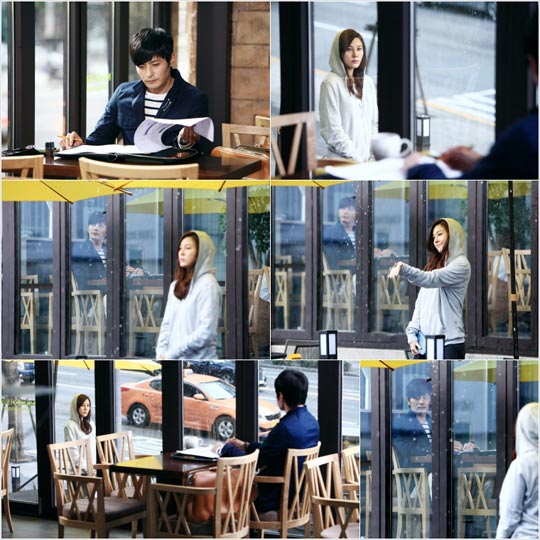 Jang Dong-gun and Kim Ha-neul met for the first time.

The first acquaintance between Do-jin and Ee-soo in the drizzling rain, gazing at each other was like a painting on a rainy day. It was as if they knew they were going to fall in love, sending each other love telepathies.
This scene was taken in a café in Seoul on the 28th of April. Kim Ha-neul greeted her senior actor with respect and Jang Dong-gun greeted her with a warm welcome. A rain machine was used to create the wet rainy scene and the two heated up the set with their affectionate stares.

The crew took careful measures for this scene more than any other scene. Starting in the afternoon of the 28th until the sunset and then again the next morning until the late afternoon, this scene was completed in a total time of two days.
Jang Dong-gun and Kim Ha-neul are working together for the first time with producer Sin Woo-cheol. They share every opinion about every scene and are passionate about creating a perfect drama.

"A Gentleman's Dignity" is about 4 middle-aged men who have been through love and break ups, success and despair. To be aired for the first time on the 26th of May.

""A Gentleman's Dignity" Jang Dong-gun and Kim Ha-neul"
by HanCinema is licensed under a Creative Commons Attribution-Share Alike 3.0 Unported License.
Based on a work from this source