"A Gentleman's Dignity" Kim Ha-neul and her hairstyle 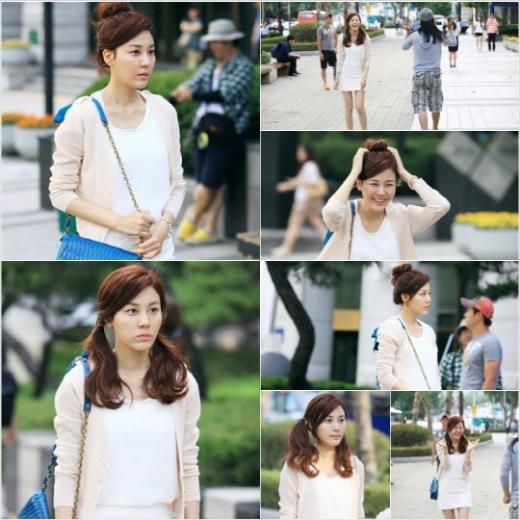 Actress Kim Ha-neul displayed a cute and lovely hairstyle in the drama "A Gentleman's Dignity".

On the eleventh episode of the SBS drama "A Gentleman's Dignity" coming on the 30th, Kim Ha-nuel changes her style into two ponytails.

All this while, she'd been sporting long hair like the teacher image which made her look elegant and poise. This time she's changed that into something cute and different.

She changes her hairstyle because of the various hairstyles she sees on the streets. Currently in the love mode with Kim Do-jin (Jang Dong-gun), she imagines herself in different hairstyles and images.

This scene was taken in Seoul on the 25th. Wearing her hair on her head in a bun, Kim appeared on the set and was told she looked like a goddess and that she looked much younger.

Producer Sin Woo-cheol said, "We added a member of staff to walk by Kim Ha-neul and she found that funny she burst out laughing and had everyone laughing and giggling for a while".

""A Gentleman's Dignity" Kim Ha-neul and her hairstyle"
by HanCinema is licensed under a Creative Commons Attribution-Share Alike 3.0 Unported License.
Based on a work from this source