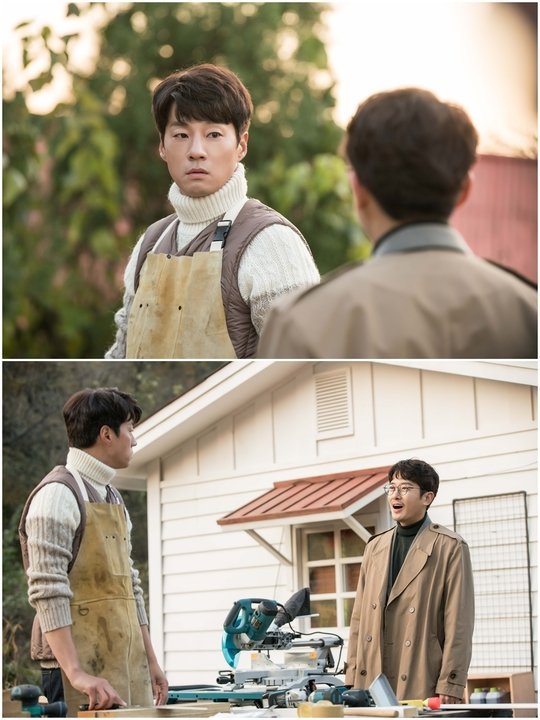 Choi Phillip makes his first appearance in "A Pledge to God".

Stills of Lee Chun-hee and Choi Phillip were posted by the production on he 5th of December.

Lee Chun-hee is wearing an apron and working on some carpentry when Choi Phillip goes to see him.

Unlike Choi Phillip who's greeting him with a bright smile, Lee Chun-hee seems hostile.

What reason does Choi Phillip, the producer of a show Oh Yoon-ah is in, have in meeting her buddy Lee Chun-hee?

Meanwhile, in the previous episode of "A Pledge to God", Song Min-ho (Lee Chun-hee) was furious that his wife Seo Ji-yeong (Han Chae-young) asked her ex-husband Kim Jae-wook (Bae Soo-bin) for a second child to save their son Hyeon-woo (Ha Ian) but in the end allowed it as he loves his son so much.

However, Min-ho realized Jae-wook was secretly helping his business and said to him, "Do you think you're god? How do you think I felt when I allowed it?"

At the end of the episode, Ji-yeong fell unconscious without even having held her second born and Na-kyung (Oh Yoon-ah) held the baby instead with excitement in her eyes.

""A Pledge to God" Choi Phillip's first encounter with Lee Chun-hee"
by HanCinema is licensed under a Creative Commons Attribution-Share Alike 3.0 Unported License.
Based on a work from this source