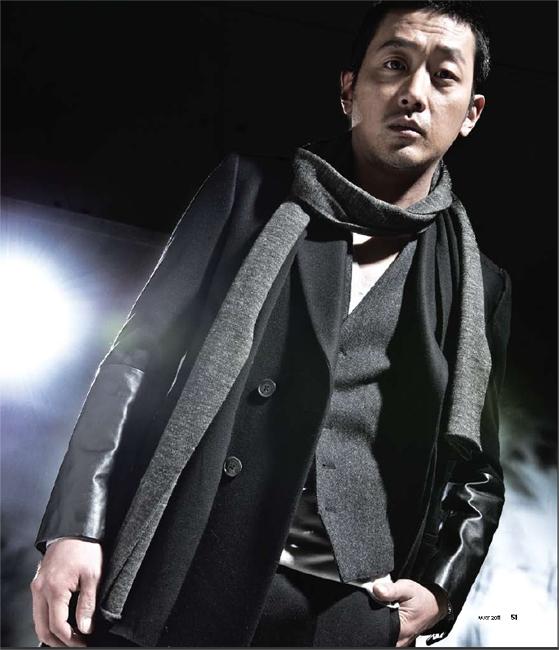 Whoosh. What can it be? It sure isn't a 4D movie in front of my eyes but as the man appears on screen a thick fog surrounds me. The scent of testosterone and perspiration and the feverish air rising from the mid-summer city asphalt, was not yet discomforting at all. From his first appearance, an Asian man wearing a sweat-soaked shirt with greasy hair that was probably never washed for quite a few days captures our eyes and nose, no!, our entire senses. In the film "Never Forever" (2007) co-starring Vera Farmiga, and Ha Jung-woo, who plays Ji-ha, an illegal immigrant living in New York, who's willing to sell his sperm for 300 dollars to a white woman named Sophie, a rich woman who wants to give birth to an Asian baby.
Sophie approaches Ji-ha physically at first but in the end up giving her heart too, it also doesn't take long for the audience to fall head over heels for this wild actor.
Before his actual debut when he continued an array of endless auditions, HA had never intentionally mention his father's name, a well known TV star. It was a token of his will and pride, to become an actor on his own. Still the talent and gift he received from his father were not hidden for too long. When he played his first main role in "The Unforgiven" (2005) directed by HA's college friend Yoon Jong-bin, his surprisingly real performance was more than enough to announce the appearance of a fine new actor, shaking up the entire film scene. In this tragic, 'military reality show' that was invited to the 2006 Cannes in the Un Certain Regard section, Ha Jung-woo realistically plays the role of a soldier who's corrupted after a harsh life in the military, but kind to his subordinates as he is about to be discharged. Since then, he made his face known to the public from a TV drama "Lovers in Prague" as Jeon Do-yeon's bodyguard, finally speeding up his career. Followed by working with director Kim Ki-duk in the film "Time" (2006), and "Breath" (2007). He also stared in "The Chaser" (2007), a film that gave him international recognition. In the film, he was a target that could never be caught.
Sitting in a chair at the police station after committing a serial slaughter, the man calmly muttering "I've tried strangling and I've used knives but they took it too hard", with an innocent pair of eyes. His words resembling that of a child, yet to be influenced by guilt, who could be as cruel and creepy because of ignorance as, he was. After reuniting with director Yoon Jong-bin in The Moonlight of Seoul (2008) as 'Madam' of a host bar who constantly bluffs at the world, with Jeon Do-yeon in "My Dear Enemy" (2008), he plays an 'ex-boyfriend' who talks so much that anyone would want to zip up his mouth.
Yet in "The Yellow Sea", he plays a silent character who escapes from an exhausting life of hardship, to find his wife whom he lost contact with after leaving for Korea, the man crosses the Yellow Sea with a coldhearted mission to "make a hit". He comes to Seoul with a single address reading '99-1 Nonheyon-dong, Gangnam-gu, Seoul".
Then once again he starts a long chase, crossing across the jungle-like city. He may be secretly dumped into the dark ocean like a dead animal he was a man who is never captured. With this film, Ha Jung-woo won the Best Actor Award at the Asian Film Awards, last March in Hong Kong. Currently, the Korean entertainment world for the last decade had been metrosexual. Protruding over the screen full of young men with face and skin more beautiful than women and sensitive attitudes, Ha Jung-woo seemed like an actor living in a wrong era.
Dark, rough skin, reckless manners, closer to sandpaper rather than a soft Kleenex, more of a wild animal than a domesticated pet, instead of stroking his hair and sitting him next to you on the sofa, you would want to watch his free movements while maintaining a tight sense of tension, ready at any moment to capture the moment someday. The yearning to catch this man is overwhelming. Yet this hunt will only end in a failure, as the only trap that can contain such a beautiful male is only the screen. Sadly, that is the amazing Yellow Sea, laid between us and this actor.