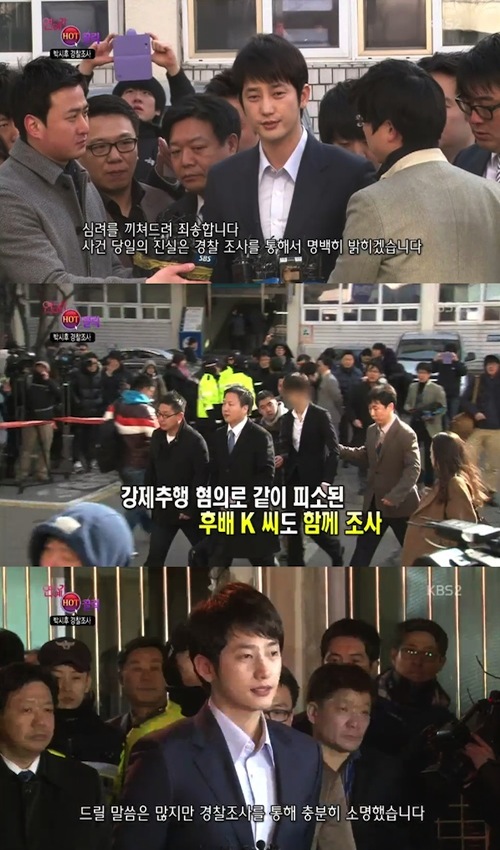 Actor Park Si-hoo, who is accused of raping a 20-something aspiring entertainer, appeared before investigators in his third police summons on Friday. A fellow actor, Kim, who also faces a sexual harassment charge and identified by his surname Kim also appeared before police.

Park arrived at Seobu Police Station in Seoul in a black minivan around 10 a.m. Clad in a blue shirt and dark navy suit, he got off the vehicle with a pasty complexion. Being surrounded by some 100 reporters who were waiting for him, Park gave a brief comment, saying, I`m very sorry for causing concern. I will clarify the truth on the day of the incident through police investigation. He and his two attorneys then hurriedly entered an interrogation room. To prevent any mishaps, police thoroughly blocked outsiders except reporters from entering the police station.

Questioning continued until late Friday evening. Police focused on why Kim carried the 22-year-old alleged victim, Lee, on his back to Park`s home Feb. 14, and whether the actor used physical force before having sex. The National Forensic Service also found no drugs in its analysis of the womans bodily fluids and blood.

Police are also reportedly investigating the contents of Kakao Talk mobile messages that Lee exchanged with Kim at 8 p.m. Feb. 15, four hours before she reported rape to police. At that time, the woman is known to tell Kim via the mobile message, I`m still drunk, and Lets go to club later today. Lee and Kim had been acquaintances.

On Tuesday, one of Parks attorneys requested to the Seongnam branch of the Suwon District Court, which oversees Kakao Talk headquarters, to maintain evidence on the contents of the Kakao messages that Kim and the woman exchanged.