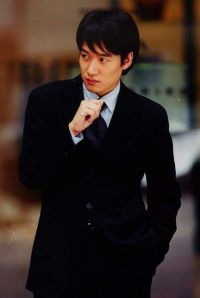 Actor Ahn Jae-hwan was found dead Monday apparently from suffocation. He was 36. His death came in less than a year after he tied the knot with famous comedienne Jung Sun-hee.

The actor, whose real name was Ahn Gwang-seong, was found in his sports utility vehicle parked in Hagye in northern Seoul in the morning, Nowon Police Station said. The point of death is assumed to be several days before. According to interim reports, there was no sign of choking or medication but as briquette ash was found inside the vehicle, the actor could have killed himself using gas.

Observers assume a recent string of business failures could have driven him to the drastic choice. He reportedly left a note in the car. In the note, he said he loved his wife and asked people to love his wife. He also said in the note that he wanted to donate his organs, if he was not found too late.

Ahn, who owned several bars, restaurants and shoe stores, reportedly suffered from bankruptcy and he recently had to sell the lucrative bar he owned in Gangnam as a last resort.

Some observers said Ahn had long showed signs of suffering. A couple of weeks ago, he was sacked from his job as a TV presenter at an entertainment news program ETU allegedly because he had missed several live broadcasts. Some media reported that he hid himself since then, but his agent explained it as a mere attempt to go on diet.

Ahn gained popularity by appearing in numerous TV dramas such as "Tears of Diamond", and "My 29-year-old Stepfather". Along with his elite image as a Seoul National University graduate, he acquired a unique position in the entertainment world and extended into other businesses using it.

Ahn is survived by his wife of 10 months and comedienne Jeong, with whom he held home-shopping cosmetics business. His body was taken to Taenung Sacred Heart Hospital.

He reportedly called up his wife around Aug.21, which the investive body assumes to be the last call he had made. A reident nearby said he had seen Ahn's vehicle at the same spot for about a month.

"Actor Ahn Dead in Apparent Suicide"
by HanCinema is licensed under a Creative Commons Attribution-Share Alike 3.0 Unported License.
Based on a work from this source