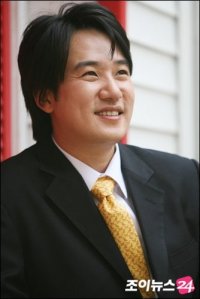 Actor Ahn Jae-hwan, 36, was found dead in his car yesterday morning. Police suspect suicide and are conducting an investigation.

Police said that Ahn was found dead alone in the back seat of his Carnival minivan, which was parked in a neighborhood in Nowon-gu, Seoul.

A suicide note and two burnt charcoal briquettes were also found in the car. Investigators suspect he died from inhaling toxic gas.

Ahn's body has been taken to a nearby hospital for further examination.

According to local news reports, the suicide note expressed his love for Jung Sun-hee, his famous comedian and DJ wife. The couple married last November.

Business ventures that Ahn had been a part of had recently failed, and he was suffering from deteriorating health. There were also rumors of marital strife.

"Actor Ahn found dead"
by HanCinema is licensed under a Creative Commons Attribution-Share Alike 3.0 Unported License.
Based on a work from this source