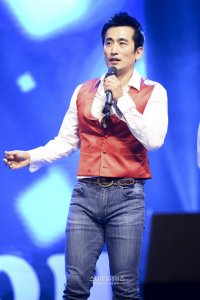 The top celebrity couple, Cha In-pyo and Shin Ae-ra, is known for their religious faith and tight family bond. They had a child of their own, adopted two more, and recruited numerous others in helping destitute children. Their charitable deeds have inspired many to also serve their needy neighbors.

Anyone who gets to know the joy of sharing is said to want to continue their service. This has become the everyday norm for Cha, which led to his dormant acting career. He has also donated W100 million each to the charity organizations Good Neighbors and Compassion. He was at one time burdened by the excessive attention the couple's activities were attracting. He was uncomfortable with respectable titles people invariably used to described him. He knew only too well the capriciousness of social perceptions. But he has now become relatively free from what others think. He says he began a new task of "emptying the drawers of his mind" through which he was able to shake off much of the greed he had inside him.

Public attention is also on his number of children--his eldest biological son Jeong-min, second daughter Ye-eun, adopted in 2005, and youngest, Ye-jin, who just turned a year old. Counting the 31 children and college students the couple sponsors through Compassion, they have 34 children in total. Cha clearly remembers the series of events that shook him up to the core and transformed into a serving person. In Oct. 2005, he followed his wife, a PR envoy of Compassion, to the Philippines on a Vision Trip, or a short term mission trip. He was stunned by the destitute, starving children there. His heart began to break in the thought that all human lives are equal, but that these children lived in such devastation. After the trip, he couldn't forget their faces. They smelled bad and were dirty but had pure hearts. His wife first suggested that they help the kids, which led to their support for ten children through Compassion. Initially, it was simply good-hearted support, until Cha made a major life decision. He would adopt a child. Since having their son, Sin asked him about adopting a girl. But right around this time, his mother-in-law was diagnosed with gastric cancer and the couple looked after her for five years. When she died, they then revisited the idea and adopted Ye-eun in Dec. 2005. They still believe God had answered their prayers. They say that giving to others is actually giving to yourself, and that loving others is another way of loving oneself. They say that the joy in serving and giving is truly immeasurable. The joy the couple received from Ye-eun exceeded their expectations. This led them to adopt Ye-jin two years later.

An MBC special program entitled "The Secret of W35,000" followed Cha's second visit to Ethiopia. Since it aired, 10,000 Koreans have joined the monthly W35,000 child sponsorship with Compassion. The growing recognition of the song "Dear My Rica", whose lyrics were written by Cha is a testament to the fantastic role model the couple represents. The song is about his own story of when he visited the Philippines instead of Sin to meet the orphan Rica, whom his wife sponsors. Sin was not able to go because of her busy schedule. Cha wrote a brief note on his personal homepage about the trip and his encounter with Rica, which moved many people.

The couple's humility, sincerity and love is serving as a "happy virus" and catalyst that is inspiring many Koreans to look to our needy neighbors. The public sees that Cha and Sin are similar even in their career moves, not to mention their private lives. Since appearing in the film "Korean Peninsula" and the TV drama "White Tower", Cha filmed the much-talked about movie "Crossing", about the touching love of a father and son. In the film, he played a North Korean defector whose love for his child had many viewers sobbing throughout the film. This is remarkably in line with his wife's movie "Ice Bar" in which she plays a strong but kind single mother who raises her son by selling smuggled cosmetics. The two have grown identical in their career moves and attitudes. In choosing their next drama or film, they are famous for looking at the work itself and not how much it pays.

Cha and Sin are no doubt a top celebrity couple in Korea. But they are clearly different from other star celebrities. Cha is also set to publish a children's book "Goodbye, hill" in March. The story is set in a "tiger village" near Mount Baekdu during the Japanese colonial era. The book is just one of the many things he wants to give back to society. His wife plans to enter graduate school next year to study social welfare. Her dream is to build a childcare center.
We realize the true meaning of life and happiness from Cha, who hopes to see all Koreans take a small step forward in helping others in the future.