Actor couple have baby on way after nearly a decade 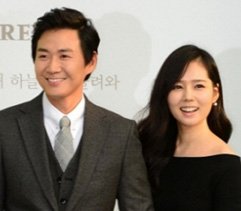 Actors Han Ga-in and Yeon Jung-hoon are expecting their first child after nine years of marriage.

"Han Ga-in is pregnant. She and her husband are thrilled about the baby but they are taking things carefully as she is in the early stages of pregnancy", Han's agency BH Entertainment said on Monday.

They became romantically involved in 2003 after appearing together in a KBS drama and got married two years later.