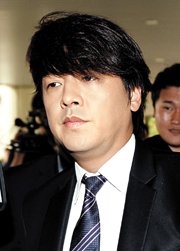 Actor Ryu Si-won has been ordered by a court to pay a W7 million fine for beating his wife and placing a GPS tracking device on her car (US$1=W1,085). Ryoo denies the assault charge and vowed to appeal.

"Based on the sound of flesh hitting flesh in the recording submitted as evidence, it is clear that (Ryoo) assaulted his wife even though it may have been quite lightly", the presiding judge said as he delivered his sentence.

The judge also took into consideration the severity of Ryoo's verbal threats to his wife in an altercation after she discovered the tracking device on her Mercedes. A tape recording contains the voice of Ryoo vowing to hire people to follow her.

The couple filed for divorce in March last year, two years after they tied the knot, but twice failed to settle out of court

"Actor Fined W7 Million for Beating Wife"
by HanCinema is licensed under a Creative Commons Attribution-Share Alike 3.0 Unported License.
Based on a work from this source