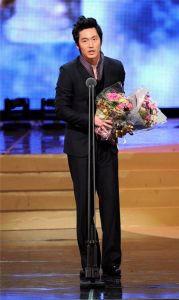 Actor Jang Hyuk, 31, who stars as a playboy in the SBS drama "Robber" ― aired on Wednesdays and Thursdays, became a father Friday.

Jeong Ji-cheol of SidusHQ, the manager of Jang, announced that Jang's wife gave birth to a baby boy.

Jang's wife, Kim, 33, was a Pilates instructor when they first met at a fitness club in 2002. Jang thanked her for her support during his hardship.

The couple was registered as married in January, however, they have not held the wedding ceremony yet. The ceremony will be held in June at a hotel in Seoul.

However, he was accused of intentionally avoiding the mandatory army service and entered the military in 2004 with other famous actors Song Seung-heon and Han Jae-suk.

Jang returned to the TV screens with widely popular MBC drama "Thank You" last year. His character of a doctor who takes a single mom and her daughter suffering from AIDS under his wing gained the empathy of viewers.

He is waiting for the release of his first Hollywood movie "Dance of the Dragon", which co-stars Singaporean actress Fann Wong.