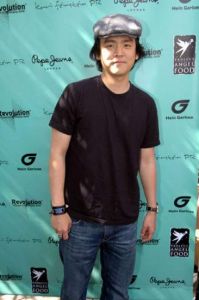 It appears that the mission of John Cho, much like his "Star Trek: The Beginning" character, is "to boldly go where no one has gone before". If the space pilot Hikaru Sulu seeks new life and new civilizations, then the Korean-American actor strives to break certain Asian stereotypes until one day it won't be necessary to do so.

Asians being typecast as funny "is a new stereotype", said the 36-year-old, explaining that Asian Americans had hitherto been labeled as "cold, non-humorous and involved in our books".

But Cho, one of 2006 People Magazine's Sexiest Men Alive, said the ultimate goal would naturally be to not worry about stereotypes for choosing parts. "Any role that gets repeated (by Asians) will be misinterpreted as a stereotype. The goal of Asians in the arts is plurality of roles. I've always been hindered by me over-thinking what is a stereotype and what isn't", he said. "The more roles there are, the more actors there are. No (Asian) actor has to think about how is this affecting anyone except me, and just think about whether or not I want to do this role".

In recent years, an increasing number of Korean actors have been cast in Hollywood films, such as Gianna Jun (Jun Ji-hyun) in "Blood: The Last Vampire". "Hollywood has been so impressed by Korean films, so there is an interest in Korean actors", he said, though carefully, not feeling comfortable about commenting definitively on the subject.

Cho does feel however that it is difficult for an actor or director's talents to wholly translate across borders, and something inevitably gets lost. He hopes that a new filmmaking hotspot will arise outside of Hollywood and rival it, so that cineastes wouldn't need to endorse a different culture in order to make a larger impact ― in 50 years or so it could be South Korea, he said.

The actor had appeared in the Korea-United States joint production "West 32nd" and said he would one day like to appear in a local project. "I was impressed by the creativity of the concept in Korea cinema. There is a unique Korean vision happening right now. () I'd like to work on a Korean movie if I had the opportunity. Mostly (because) I'd like to stay here for an extended period of time", said the Los Angeles native.

Meanwhile, "Star Trek", helmed by "Lost" and "Mission Impossible 3" creative brain J.J. Abrams, is currently topping the North American box office, drawing in more than $79.2 million during its opening weekend according to the Associated Press.

" I'm very excited", he said. "I know there was some level of suspicion about how we'd handle this franchise that was considered kind of dead". The action flick is based on the epic sci-fi television series tracing the adventures of the Federation starship U.S.S. Enterprise, a pan-universe version of the earthly UN.

"It's one of those series that has been consistently on re-runs for 40 years. It has become of part of the cultural fabric of America", he said. However, he stopped watching the original series; the lead actor, Chris Pine, who plays the role of Kirk, previously said the same thing to The Korea Times. "I stopped because I knew much more (about `Star Trek') than I realized; it had been around for so long that I forgot I'd seen and had absorbed it".

In the original series, Cho's character Sulu was "very much in command of the spaceship", he said. In the prequel, Cho said he portrayed a young Sulu that is "a little shakier, a little less secure". Indeed, the film invited some laughter when the highly trained pilot is unable to launch the spacecraft in one go.

As for playing a role originally played by Japanese American actor George Takei, Cho said it was "fair game as an actor", since the part did not require a Japanese accent or Japanese lines. Unlike old TV series such as "Mash", where non-Korean actors were forging Korean accents", he was "happy my casting fulfills (the original TV series creator) Gene Roddenberry's vision of a multinational spaceship".

In an interview with The Korea Times two years ago, in Busan, Cho said he always wanted to play roles such as a classic American cowboy that he played as child with his younger brother. Starring in "Star Trek", something he grew up watching, seems to be a great start.

Born in Seoul in 1972, Cho immigrated to Los Angeles at the age of six. He stepped into the world of acting by chance while majoring in English literature at UC Berkeley.

"Actor John Cho Aims to Break Stereotypes"
by HanCinema is licensed under a Creative Commons Attribution-Share Alike 3.0 Unported License.
Based on a work from this source