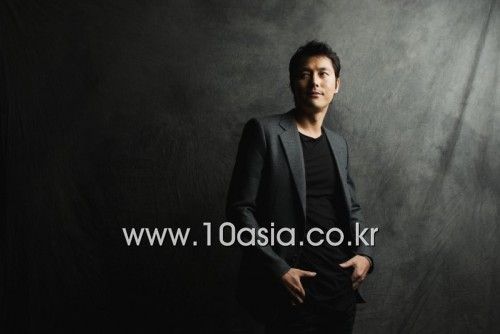 Where would each South Korean actor rank if lined up by order of interviewee capability? There are definitely more than a few names that would make the list but actor Jung Woo-sung without doubt would be one of them leading the pack. Our conversation with him did not concentrate merely on recent issues such as his latest film "Reigns of Assassin" or his visit to the Venice Film Festival. The answers he put forth rather made the listener chase after the thoughts he holds within his mind. "You're not considered awake just because your eyes are open or you're speaking. I think what's important is that you keep looking back on what you think instead of letting a single thought settle in your mind. Because if you have a set thought, it means you're narrow-minded and are going to be picky. Of course, you also need to have good judgement within that mindset although Buddhology tells you not to judge because that means you're making a conclusion. So what I mean here is not to reach a conclusion but judge what's right or wrong. But they actually say not to do that either. (laugh) I think you just have to accept everything as it is. Your heart will eventually open if you open your mind and chase after one topic after another".

Jung Woo-sung is also sure of how he is perceived by others. "There is an image the public wants to see from me. Although there is definitely a different look I want to put on so I tried to break free [of that image] through 'Mutt Dog'. And by experiencing different ups and downs I came to look back on the roles that fit me. Having self-awareness as a star is the first step to becoming a better one".

In "Reigns of Assassin", Jung Woo-sung flaunts the look of someone who has taken a step forward while donning an image that fits him perfectly. That is why his level of contribution to the martial arts action flick by John Woo is all the more special. To the extent that director, who has been asking for Jung for a long time now, has said he wants him to participate in whatever film he works on from now on. Jung is the one who added trifles of laughter and warmth to the film one expected only to contain action sequences, as well as an earnest romantic vibe. Below are movie recommendations which Jung says draws exclamation out of him.

1. "A Better Tomorrow, 1986"
1986 | John Woo
"I think I watched it in ninth grade and of course I imitated it a lot. The sensitivity I felt back then has had a huge influence on me - from the loyalty men have to the loneliness cities hold. And every character was the main character but it felt like the city was as well. I still remember the scene where Chow Yun-fat eats at the car wash and the scene where he gets a bloody nose after being beat up on the rooftop of a building was shocking. I watched in awe, thinking 'How did they make the blood gush out like a waterfall? That's real'. People usually drop just a line of blood even in movies these days. (laugh)"

"A Better Tomorrow, 1986" is more than just a popular movie -- it represents nostalgia for the time when it was shown. The film, which has left several inerasable images through its use of props including the Burberry coat, double pistols and matchsticks, was recently re-made into "A Better Tomorrow" by a Korean director and actors.

2. "Memories of Murder"
2003 | Bong Joon-ho
"Nobody has recommended this film yet? This is a movie that I really like a lot. It exposes serious social issues but through humor so it was as if I was watching a traditional outdoor performance. One that is refined at the same time in regards to structure. I really like the cinematography and art as well, and the movie had a very good balance of various cinematic elements".

A movie based on a yet-to-be-solved actual series of murders which took place in the city of Hwaseong in Gyeonggi Province, South Korea between 1986 and 1991. Bong Joon-ho's meticulousness created a masterpiece -- he did not miss on a single detail including the drama, humor and charm.

3. "Peppermint Candy"
1999 | Lee Chang-dong
"'Peppermint Candy' delivered the injustice of its time as it is by depicting on a group of people. And that very intensely. I really like director Lee Chang-dong's movies including 'Green Fish' and "Oasis". So one time when I ran into him, I told him, 'I really like your works but I don't think I'd suit your films'. To which he responded, 'Why? I think you'd suit them. You probably will', but he has never asked for me. (laugh)"

What turns Young-ho (Sol Kyung-gu) into a monster? How is it that he had no choice but to take his own life when he is someone who used to become over a single piece of Peppermint Candy his first love gave him? It is even more of a pity that he cannot go back to that precious moment, despite him crying out "I want to go back".

4. "The Getaway"
1972 | Sam Peckinpah
"I like Steve McQueen's 'The Great Escape' but 'The Getaway' is the type of movie I want to do. Because I like action-melodramas the most. It's a movie I will dash for if someone says it is going to be re-made again. The situation that they're love is faced with is fun and I think the movie does well in bringing out how the woman so easily throws herself for the man she loves, and the man who cannot help himself from hitting that woman for that".

A married couple, on the run as bank robbers, are faced with the double torture of being threatened by their colleague who has betrayed them and them doubting each other's love. Through this movie, Steve McQueen and Ali MacGraw became an actual married couple and Alec Baldwin and Kim Basinger, married in real life as well, starred in the 1994 remake.

5. "Plein Soleil"
1960 | René Clément
"This movie shows that men can be beautiful. From his wardrobe to his tanned face to his body which is slender yet enough to win females' hearts, everything about Alain Delon was amazing in 'Plein Soleil'. It was re-made into "The Talented Mr. Ripley" as well but I think it would've been better if Jude Law played Matt Damon's role and someone more cheesy played Jude Law's role. (laugh) Jude Law did give off more of the vibe of a fashionista back then".

"Plein Soleil" is full of sunlight of the Mediterranean and a man's desires. Ripley (Alain Delon), who will without hesitation even commit murder for what he wants, surely cannot be called good-hearted. But he seems forlorn and pathetic the moment his perfect crime fails. Ripley's last moment, of when he wanted everything yet fails to gain nothing, lasts in one's mind for a long time.