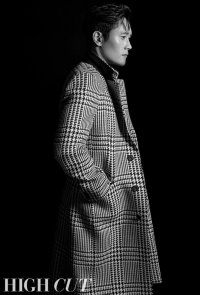 Lee Byung-hun continues to expand his horizons. After his "kimchi Western" flick "The Good, the Bad, the Weird" featured at the Cannes Film Festival last year, he made his Hollywood debut in "G.I. Joe: The Rise of Cobra". In the fall he will appear in the U.S.-France joint production "I Come With the Rain", and his anticipated blockbuster TV soap "IRIS" will hit screens at the end of the year.

All these works were shot overseas. "I Come With the Rain" is particularly drawing much attention: directed by esteemed Vietnamese-French auteur Tran Ahn Hong, the movie stars Lee opposite Hollywood heartthrob Josh Hartnett and Japanese superstar Takuya Kimura. It will be screened at the 14th Pusan (Busan) International Film Festival (PIFF) next month before hitting theaters nationwide Oct. 15.

"I deliberated for a year for this piece", Lee was quoted as telling Yonhap News, explaining that "choosing this piece was an experiment".

"When I first received the script I thought it was too abstract. I was afraid; I thought 'Would I be able to pull through when I don't fully understand the piece?' But how much would this world-renowned master director know about me? Just my name and maybe a couple of works I starred in. But I was curious about what strengths this director, who has no stereotyped opinion of me, sees in me, and how he would use me", said the 38-year-old.

Lee said that the movie "has become a turning point" in his career. As someone who tends to wait for works that are "sure to move his heart and even stone bridges" he was able to be more open-hearted. "I was very curious but I couldn't accept the offer right away because I was afraid. `No, if I'm curious then let's face it head-on', I told myself. I am an actor for life but I was also thinking how much longer I can work in my best condition", he said.

Lee said he was perplexed by the director, who had the actors direct their own acting. But once he became accustomed to it, he learned to appreciate the novel experience.

"The director was like, 'Do it as you like. If you move the camera will follow'. Even though this one scene was edited into just a five-second reel, I was dumbfounded having to act for one to two minutes without any direction. But once I got used to it I liked it", he said. Lee explained that he even shed tears as he immersed himself in the moment, but that part got cut out.

"Gosh I just did it, but in retrospect I don't know how I did it. I thought it would be OK to fly back and forth since it's China and Hong Kong, but the Chinese set was in the desert so I had to transfer flights three times.

Including the waiting time, it took 13 hours. The third time I travelled I came down with a terrible fever and had to visit a foreign hospital for the first time in my life", he said.

When asked if it was spiritually and physically draining to star in big budget movies, he said he did feel pressured but tried his best to overcome it.

"But acting in smaller-scale movies doesn't lessen the amount of pressure or responsibility. On the other hand, it can be paralyzing to become obsessed with the idea that you're starring in a big-budget film. Freedom is the most important thing for an actor", he said.

"I did not intend on starring in big budget projects. I like to be free of such thoughts. Like my fans, I like to feel the anticipation and anxiety and face it head-on, about what piece I'll do next", he said.

"Actor Lee Expanding Horizons"
by HanCinema is licensed under a Creative Commons Attribution-Share Alike 3.0 Unported License.
Based on a work from this source