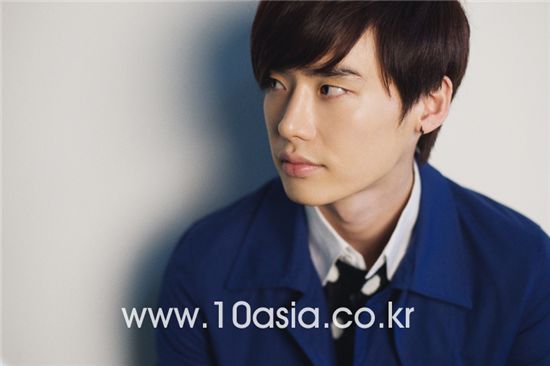 "I went to a restaurant yesterday and there was a lady who called me by my name and gave me a free drink. It was unbelievable!" Lee Jong-suk is a rookie actor from SBS TV series "Secret Garden" who is still not used to people recognizing him on the streets. Despite making short appearances in the show, he has made a strong impression playing the dirt-poor musician Sun who is so broke that he will sing at bars and work on fishing boats but harbors a pride strong enough to jeer right into the face of Hallyu star Oska (played by Yoon Sang-hyun) about how his music "stinks". He confessed that in reality however, he is so shy that he was close to an outcast among the drama team until actor Yoon started speaking to him first. Nonetheless this shy boy who breaks into an occasional smile, proved himself quite charming in his interview with 10Asia.

He dreamt of becoming an actor basically because he "wanted people's attention", but it took some time for him to get a role. Though he began modeling at the young age of 16, he had a hard time in the world where people are particularly strong-minded. He had already failed once at becoming an idol singer after joining a group as its youngest member and it took him another three years after that to make his acting debut as an investigator on SBS series "Princess Prosecutor" which went on air early last year. So perhaps it was those years of anticipation, Lee is not quite sure, but he is so immersed with his role that whenever he talks on the phone to one of his close buddies, Hyo-yeon from Girls' Generation, he finds himself speaking curtly like Sun and said he is "already prepared" for the possible romantic relationship he may form with Oska, to whom he declared he is gay early in the show, almost as if he is looking forward to that as well.

But despite the "amazing amount of love and attention" he has received as an actor in the first year of his acting career, there is bound to be more to be desired. "I actually don't sing in the drama -- it's actually new singer Len. I ended up having to have to use a double but I would like to sing songs myself if I'm ever given the role of a musician again". 10Asia received recommendations of five songs that Lee would want to sing some day -- those that he hums a lot or practiced a lot while undergoing vocal training. Below are the songs he picked with much difficulty.

1. UN's second album "Traveling You"
"Back in elementary school I had many friends who liked UN and this was the song I ended up listening to a lot. I tend to take the lyrics of a song into a lot of consideration when choosing a song and the lyrics for "The Present" are very nice as well. I'm not the kind that sings a lot even when I go to a karaoke bar but I always tend to sing this song". This is a song, that Lee has listened to for the longest time during his life and is Lee's main song for when he goes to a karaoke bar, is about a guy who believes there is not enough presents to express his love for the girl he loves. Starting with "Wave", Korean duo group UN produced many hit songs including "The Present" and "Eternity" but disbanded in 2005. Member Kim Jeong-hoon who pursued an acting career after that went to the army while the other member Choi Jung-won-I released a digital single album "Sunshine On Summer Time" in 2008.

2. Fly To The Sky's sixth album "Transition"
Following UN's "The Present", Lee recommended Fly To The Sky's "Like A Man", saying that he "much prefers male voices when it comes to ballad songs". "It's the song I listened to a lot since 11th grade. When I don't feel well, I set up the mood to listen to this song and it feels good in a gloomy way (laugh)". Fly To The Sky, where Hwanhee has a rough and manly voice that many guys have probably imitated at least once, combined with Bryan's delicate voice, always seems to succeed at delivering song that appeal powerfully. They have several hit songs including "Missing You", "Day By Day" and "Sea of Love" but the two singers now pursue individual careers.

3. Richard Marx's "Paid Vacation"
Not only is Richard Marx's "Now and Forever" released in 1994 regarded one of the most beautiful love songs to date but is also a classic that many guitar learners try their hand at thanks to its beautiful melody. So maybe is it no surprise that Lee, who "prefers old songs" to new ones, receives vocal training twice a week and wishes to learn how to play guitar when given the chance, chose this song. "I usually practice with old songs free of technical arrangements and this is the pop song I practiced with frequently during my past vocal training".

4. Len's "Winter Story (Digital Single)"
"I came to know Len through "Secret Garden". He was doing a part-time job, playing a piano and singing in a live cafe so I went there for some reference on playing the part of Sun. That's when I heard this song and wow, it was amazing". Len, who played the singing voice of Sun in "Secret Garden", also released digital album "Winter Story" last month. A song that reminisces on the time he walked a tree-lined street with his lover, reaches an impressive climax during its second half.

5. Comeback Madonna Band's "'I Am Legend' Soundtrack Part 3"
Lee, who had been recommending male vocalists from the start, gave his last choice as female band Comeback Madonna Band's "A Million Roses". It is not an odd choice given his taste for oldies but goodies. "I watch a lot of dramas and in SBS series "I Am Legend", I saw that Comeback Madonna Band did a remake of famous trot singer Shim Soo-bong's 'A Million Roses'. It's an old song so the lyrics are good... especially for when I play online games in a PC room (laugh)", Lee said it jokingly but "A Million Roses", thanks to its easy-to-follow melody, is one of the most widely-loved songs and not just in karaoke bars. The song was ranked No.1 on the ringtone list for middle-aged mothers, after all.

"Actor Lee Jong-suk's Song Picks"
by HanCinema is licensed under a Creative Commons Attribution-Share Alike 3.0 Unported License.
Based on a work from this source