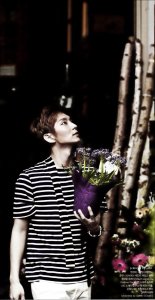 Actor Lee Joon-gi has stepped forward with his fans to help the victims of the devastating earthquake that hit the Sechuan Province in China.

Lee's management agency said the gesture was his way of giving back the love and support he has been receiving from his Chinese fans. The actor--when he read the news that his Chinese fans had launched a campaign to collect 1 yuan coins for the quake victims--decided to begin his own relief campaign to collect one thousand won notes, equivalent to one U.S. dollar, with his Korean fans. All of the proceeds will be donated to the Red Cross.

Lee takes on the role of chivalrous thief Iljimae in the popular SBS drama series "Iljimae".