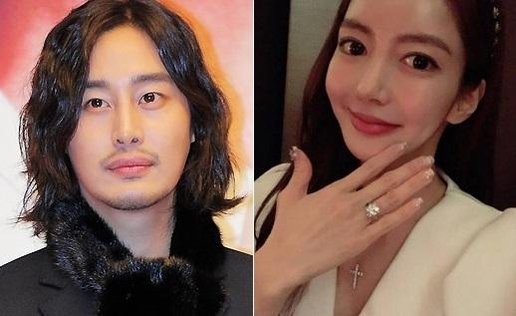 Shopping mall CEO and influencer Park Hyun-sun posted a picture on Instagram of being proposed to and the groom-to-be is none other than the actor Lee Philip.

Park Hyun-sun revealed a picture of her engagement ring. A man in a grey suit is kneeling on one leg in front of Park Hyun-sun and proposing to her with a ring. In another picture, she is wearing the ring.

While friends congratulate them on their engagement, questions rose to as who the groom is. Netizens point out Lee Philip, who announced that he was dating a shopping mall CEO last month. However, Park Hyun-sun didn't reveal her partner in the pictures.

Lee Philip is the son of Lee Soo-dong, the chairman of global IT company STG. He debuted in 2007 with "The Legend". He graduated the University of Boston and continued his Masters in George Washington University. He's is currently inactive as an actor.

"Actor Lee Philip Proposes to Park Hyun-sun"
by HanCinema is licensed under a Creative Commons Attribution-Share Alike 3.0 Unported License.
Based on a work from this source