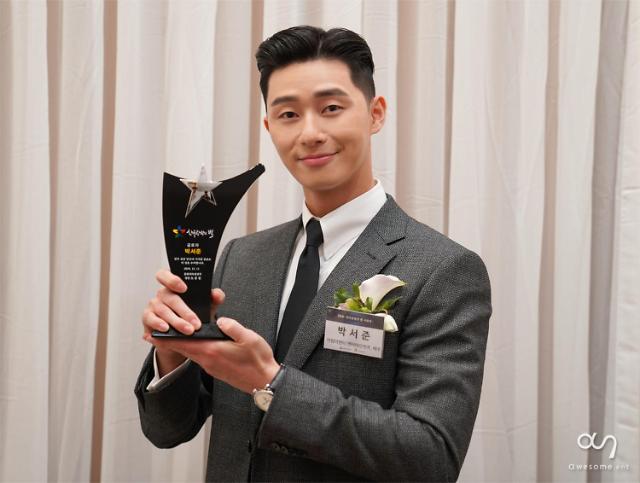 Actor Park Seo-joon has been recognized for his contribution to promoting Korean tourism this year. He received a commendation from the Ministry of Culture, Sports and Tourism at a ceremony on Tuesday.

The ministry has honored those who contribute to Korean tourism since 2010. Previous recipients include actors Bae Yong-joon, Jun Ji-hyun, Lee Min-ho, Park Bo-gum and So Ji-sub and former figure skating star Kim Yu-na.

Park has been enjoying popularity both at home and abroad for his appearances in the reality show "Youn's Kitchen 2" and the TV series "What's Wrong With Secretary Kim" this year.

He won a best actor award at the Seoul International Drama Awards in September. In November, he was invited to the Cosmo Beauty Awards in Shanghai, China, where he was named one of the year's best stars.

Park said, "It's been eight years since I debuted. When I started, I never imagined that I would be loved this much. I am so thankful for that".

"I've heard that not only Koreans but also many people from around the world visit places where Korean dramas and films are shot. This can sometimes be an encouragement in working in showbiz. I accept this award on behalf of other actors and singers who try to promote Korean culture. I will keep working hard to be a better actor", he added.