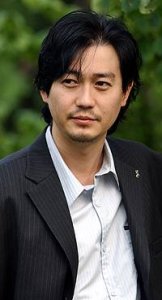 "I'd say it was the scene where I meet Namgoong Min at the end of the film. Although it was the most important scene, where the intensity of emotion reached its climax, it was shot during the early stages of filming. I wasn't sure whether or not it was right".

Seok Myeong-hong, CEO of Cineline, the production company of "Beautiful Sunday": Have you ever regretted rejecting an offer to star in a film?

"Many times. Some films became very successful while others didn't. I don't want to name the titles. Some people call it destiny which repeatedly torments actors. There is no correct answer and regretting does not do any good. However, the success of a film does not last forever".

Shin Gyeong-ho, Director of Star Park  management agency of Park Yong-woo: You have been driving your car for eight years? Would you like to sell it to me at a low price? And how much money would you like to make?

"Many people seem to be interested in my car. Actually, it is seven years old, not eight. I have only driven it for 17,000 kilometers so far. When I say I don't have a girlfriend, everyone says I am a liar. But how could I drive so little if I had a girl friend? This car is still in a very good condition. There is no chance that I will sell it to you. I am a very down-to earth person. Am I flattering myself? I am not greedy. I have already earned more money than I ever wanted. Pride as a professional is more important than money".

Wang Ji-hye, rookie actress co-starring in the film: People ask me this question a lot. If you were Soo-yeon, would you be able to forgive Min-woo?

"I guess I couldn't forgive him. I cannot understand it. If Soo-yeon developed supernatural powers and was able to read Min-woo's mind 100 percent of the time, I think she would shed a few tears and say, 'You are truly an extraordinary person'. I would experience a mixture of love and hate".

Actor Namgung Min: Yong-woo, you seem to be interested only in acting and nothing else.

"Although I am not completely devoted to acting, it may look that way because I am not lucky enough to be able to enjoy my life fully. Although I usually get bored doing something for a long time, acting makes me feel alive and changes me; even though it entails pain. I want to be an extraordinary actor while being an ordinary person".

Jo Ah-ra, marketer of Arcade, the promotion agency of "Beautiful Sunday": You always wear the same black parka. Aren't you interested in fashion?

"When I get up, I wear the clothes lying closest to me; which just so happened to be the parker. I don't have to wear fancy clothes as I change clothes on the film set. Last year, I wore the same red jacket for five months in a row. I am not interested in clothing. Although I have received brand-name clothes as gifts, I have never bought them myself. There are actually quite a few celebrities like me (He came to the set with the black parker and got changed on the day as well).

Eom Jung-hwa, a close friend of Park Yong-woo who has been cast in the film "I`m Living with Who I Love", with Park: What do you think of me as a woman and also as a person?

"Ha ha. Well, I know you're not interested in me at all. Why did you ask that question? You are mean. As an individual, I think you are a very honest and straightforward person. But as a woman, I think you are too popular, leaving no chance for a guy like me. I would feel uneasy in a relationship with you".