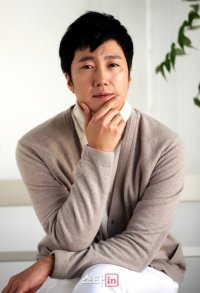 Does actor Park Hae-il have a thing about being a murderer with a handsome face?

Park said the two films share many things in common but the new thriller prompts the audience to jump into a high-stakes mind game.

"I thought that the two films would be similar as they are made in the same genre", Park said Monday during a news conference at the Apkujong CGV theater in Seoul. "But `Memories of Murder' was based on a real story, whereas `Paradise Murdered' is fiction based on what the director personally thought up".

The new film will be like a puzzle that the audience wants to solve, which will stir controversy over its reality after release, he said.

In the film, Park plays Che Wu-song, a head doctor at a public health center. His name is put on the suspect list as it turns out he tried to conclude that the first murder was a suicide and didn't have an alibi for the day it was committed.

Since his debut in 2001 with the "Waikiki Brothers", the 29-year-old actor has received acclaim for his impressive performances. He dazzled audiences in a supporting role as a coldhearted murder suspect in "Memories of Murder", a kind and gentle postman that falls in love with an uneducated diver in "My Mother, the Mermaid" (2004) and a weird flirter in "Rules of Dating" (2005).

His superb performances have usually led his films to become box office hits. His most successful film was last year's blockbuster "The Host", which has become the most-viewed film in Korea, selling more than 13 million tickets. The movie is currently showing in China and United States. It came in first at the Chinese box office and earned $320,000 in the U.S. in the first week since its release.

"As a huge fan of his, I was so excited to costar with him in the film. He has an adorable face with a refreshing smile. He seems ordinary but is very attractive", she said.

After the film, the actress finds herself still a huge fan of the actor, but her fantasy has changed a little bit, she said.

"I think he tried to relax me. He passed wind and burped really loudly, which was quite amazing. I think Im going to miss those sounds", she said laughing.

Responding shyly, Park Hae-il said since "The Host" he only does this when he is in a closed room.

"Paradise Murdered" will be released nationwide on April 12.

"Actor Plays Murder Suspect Again"
by HanCinema is licensed under a Creative Commons Attribution-Share Alike 3.0 Unported License.
Based on a work from this source