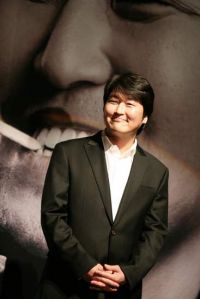 Surefire hit maker Song Kang-ho is back with a new film _ however, it is a gangster film, a genre that is now regarded as trite.

He said that the new film, "The Show Must Go on", is different from other gangster films as it sheds light more on a man, a family man, rather than a member of a criminal gang.

"I tried to do my best to show a man in an ordinary world, rather than in a criminal circle", Song said Monday during a news conference at the Lotte Cinema in Chayang-dong, Seoul. "This man wants to lead an ordinary life with his family but his job makes it impossible".

Directed by Han Jae-rim, the film revolves around Kang In-gu (by Song) in his 40s, who is a gangster but dreams of living in a rural area peacefully with his family. But his agony begins as his life begins to unravel.

To successfully create and play his character, Song drew on his personal life.

"My character in the film resembles me in many ways. As a man in his 40s, I've been married for 11 years. I try to do my best to be a good father and husband and a respected social man outside the family", Song said.

Given the success of his films, it is, at least, true that he is one of the most successful actors and his efforts outside his family has been quite fruitful.

His hit films include last year's "The Host", which has become the most-viewed film in Korea, selling more than 13 million tickets; the 2003's thriller movie "Memories of Murder", which sold over five million tickets, the 2000's blockbuster "JSA - Joint Security Area", which drew over six million moviegoers.

What's his secret in selecting a film with high commercial potential?

Although he is regarded as a surefire hit maker, he said that he does not choose a film for its commercial potential, not to mention that he has no talent in the selection of would-be-hit films. He attributed all the success of his films to their directors.

"I think I have been simply lucky to work with talented directors", Song said.

Director Han, with whom Song works together for the first time, is well known for his 2005 hit "Rules of Dating". In his debut work, Han talked about a couple's romance and love in his own twisted yet interesting way.

Also starring Park Ji-young, Oh Dal-soo and Kim So-eun, "The Show Must Go on" will open nationwide on April 5.

"Actor Song's New Show Goes On"
by HanCinema is licensed under a Creative Commons Attribution-Share Alike 3.0 Unported License.
Based on a work from this source