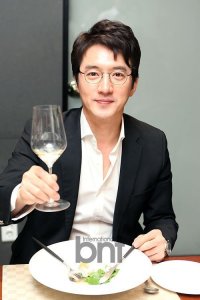 The ETHI Choir, which arrived here last Thursday, was organized by a Korean children relief organization "World Together" in 2006. The aim of the choir project was to help Ethiopian children gain confidence and also give them a chance to travel and perform around the world. Comprised of 28 Ethiopian children from ages seven to 13, the choir gave a performance on June 24 at Chuncheon, Gangwon Province, the location of the Memorial Tower for Ethiopian soldiers who fought in the Korean War (1950-1953).

Jeong will bring "Love's Foodcar" to the Misari Boat Race Stadium to meet the choir on Saturday and have lunch with them. The children will also spend time with the 37-year-old movie star, who will bring bicycles and inline skates with him.

"I am very happy to share our love despite different boundaries and races. It is meaningful to meet the descendants of the Ethiopian soldiers who died fighting in the Korean War", Jeong was quoted as saying by his agency, Zoo Money Entertainment.

The ETHI Choir will visit Gyeongbok Palace and attend the Korean non-verbal "Nanta" performance on July 7. On July 10, the choir will visit Cheong Wa Dae before heading back to Ethiopia on July 11.

Jeong, a popular actor who starred in various movies including "Marrying the Mafia" (2002), started his "Love's Foodcar" volunteer work to help needy children and neighbors who live close by. The organizers and volunteers literally drive a truck full of warm food and travel near and far nationwide to help those in need.