Actor who almost has unibrow 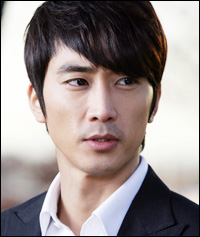 What do Korean actor Song Seung-heon and Robert Pattinson, protagonist in the "Twilight" saga in common?

Both of them have good looks that are complimented by their eyebrows.

For some fans of the 35-year-old Korean actor, the similarities would go a step further. He never ages as if he were Edward Cullen, the vampire played by Pattinson in the movie adaptations of Stephanie Meyer's adolescent books.

Already in the business for 16 years, he has hopped from one genre to another ― tragedy to comedy.

In 2011, he showed his star power yet again with the successful drama "My Princess".

Now, a year after the successful airing of the show on MBC television, Song will return with "Dr. JIN", an adaptation of a Japanese "anime" about time travel.

Song is regarded as a member of the Korean quartet, four leading Korean actors who have powered 'hallyu" or the Korean wave.

As cliche goes, it is his good looks that prove to be his limiting factor.

Critics say that he still has a long way to go, if he wants to prove he is not only good looking but also a good actor.

Lately, he has been putting his talent and time to helping the needy through his culture-sharing activities with the Korea Foundation.

"Actor who almost has unibrow"
by HanCinema is licensed under a Creative Commons Attribution-Share Alike 3.0 Unported License.
Based on a work from this source