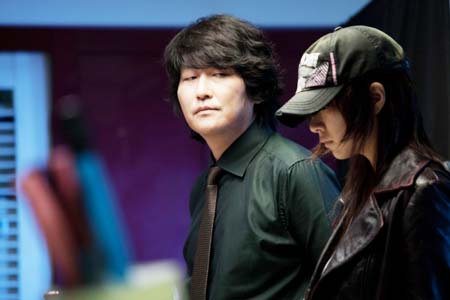 In the 1990s, Lee Hyun-seung shot to stardom with the visually lush "Blue In You" (1992) and became a household name with another striking film, "Il Mare" (2000), which went on to become the first local flick to be remade in Hollywood (into "The Lake House", a 2006 piece starring Keanu Reeves and Sandra Bullock).

Lee is an artsy auteur with a knack for painting beautiful scenes, capturing an ambiance and crafting subtle nuances between characters. His latest film is yet another unconventional drama exploring an intimate yet hard-to-nail-down relationship between a man and woman, but the script often resorts to laughably cliched elements to propel its rather choppy narrative structure. As a result, the striking visuals, particularly those set amid a blue salt farm (thus the film's Korean title "Blue Salt"), end up feeling like a very, very long and expensive music video.

However, fiendishly talented actors, including the irreplaceable Song Kang-ho in the lead, and screen veteran Youn Yuh-jung spicing things up in a charismatic supporting role, give substance to the overly stylized story.

Song has worked with Korean cinema greats such as Lee Chan-dong, Park Chan-wook and Bong Joon-ho, and is no stranger to playing a gangster. Following the press preview for "Hindsight" in Seoul Tuesday, he told reporters how he began as the youngest member in the gang in "Green Fish" (1996), rose to third in the ranks in "No. 3" (1997), became second in line in "The Show Must Go on" (2007) until finally portraying the boss in "Hindsight".

The actor brings a much more mature characterization of the guy-next-door-with-secrets persona he has portrayed in films like 2010's "Secret Reunion", aka "Blood Brothers". Here he plays Du-heon, a legendary figure in Seoul's underworld who retires and resettles in Busan in order to pursue his dreams of becoming a chef - to use the knife for healthier purposes.

In spite of Du-heon's wish to lead a quiet life, past ties do not let go easily. The former gang boss had been part of an alliance between once-feuding clans that united under the leadership of a veteran mobster. The president of this united league of gangs had always eyed Du-heon as his successor, and so his jealous peers keep tabs on his activities in Busan. Starlet Shin Se-kyung casts off her feminine image to play the watchdog Se-bin, a young rebellious type with a penchant for motorcycles and leather jackets.

Se-bin closes in on her subject by enrolling in the same culinary academy. Du-heon is far from exhibiting any signs of talent as a cook while Se-bin seems to be a natural. The two are drawn closer to each other as they bicker over proper ways of handling fish, and develop a strange friendship. Sin, initially awkward, eases into the role as her interactions with Song become greater.

Meanwhile, other gang bosses feel increasingly threatened by Du-heon, and Se-bin, who happens to be a former national shooting athlete, is ordered to kill her new friend. When our young heroine refuses to execute the mission,her best friend Eun-jeong (model Esom), oblivious of the intimate ties the two have established, makes an attempt to kill Du-heon herself. But Eun-jeong meets a fatal end after the failed attempt and Se-bin decides to kill Du-heon out of vengeance. And yet, every time she has a good shot at her target, she hesitates. In the meantime, Madame Kang (Youn), the ruthless hitwoman whom Se-bin works for, decides to employ another sniper, K (Kim Min-joon), to kill Du-heon.

Du-heon on the other hand eventually learns that Se-bin has been ordered to assassinate him, but firmly believes she never will and does all he can to protect her.

The story here is simple: A young girl befriends her target, while the target is aware of the situation but pretends not to know. The film, though, strays too far away from its main idea to explain the background stories - the only saving grace is that the supporting actors, such as the surprisingly goofy Chun Jung-myung and veterans such as Oh Dal-soo, make these unnecessary tangents interesting. The film's ultimate mistake is that it wraps up in a rush with a surprise ending that dispels the magic.