Actors to Wed After Years of Playing On-screen Couples 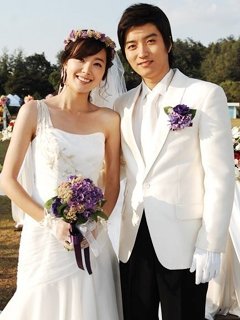 So Yi-hyun (left) and In Gyo-jin in a scene from a drama they appeared in together in 2008.

Actors So Yi-hyun and In Gyo-jin will tie the knot on Oct. 4, their management agencies said on Wednesday. The surprise news came just two days after they officially made their relationship public on Monday.

The couple first met 12 years ago when they belonged to the same agency, giving them ample opportunities to get to know and bond with each other. Their respective parents have also long known one another.

Their agencies said that In proposed to So last month and So accepted happily.

The two actors played a couple in an SBS drama in 2008 and husband and wife in the JTBC show "Happy Ending" in 2012.

"Actors to Wed After Years of Playing On-screen Couples"
by HanCinema is licensed under a Creative Commons Attribution-Share Alike 3.0 Unported License.
Based on a work from this source