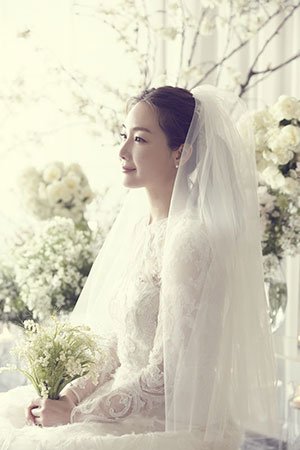 Actress Choi Ji-woo tied the knot with her boyfriend, whom she has been dating for a year, in a surprise private ceremony in Seoul on Thursday.

Choi announced the unexpected news in a handwritten letter posted to her fan site on the very day of the wedding.

"Today is the day I get a fresh start with my life partner", she wrote. "We will make a home together. I'm sorry that I kept it a secret. He is not a celebrity, so I was afraid I might cause trouble for him".

Her management agency confirmed the marriage, saying, "Choi held a private wedding with only family members attending". Her agency did not provide personal details about the groom, except that he is an office worker.

Choi got her start as an actress after winning an audition organized by MBC in 1994. She shot to fame in the KBS TV series "First Love", which garnered viewer ratings of up to 65 percent when it aired from 1996 to 1997.

She came into her prime after starring in the megahit KBS TV series "Winter Sonata" in 2002. Thanks to her pure image, she gained immense popularity in Japan, together with the drama's male lead Bae Yong-joon, and even earned the nickname "Ji-woo hime", meaning "Princess Ji-woo".

The Asahi Shimbun and other Japanese media outlets reported on her wedding.

"Actress Choi Ji-woo Ties Knot in Surprise Wedding"
by HanCinema is licensed under a Creative Commons Attribution-Share Alike 3.0 Unported License.
Based on a work from this source