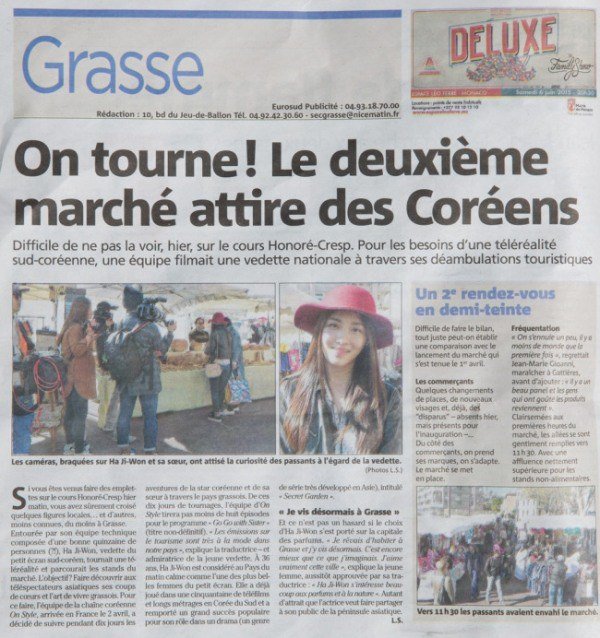 Actress Ha Ji-won was featured in one of the top French newspapers, Nice-Matin.

Nice Matin featured Ha Ji-won who was filming a movie in the area of Grasse and living the life of a local. Nice-Matin is an influential newspaper in France and introduced Ha Ji-won along with the mention of "Sister Go Go". It quoted her saying, "I have always wanted to visit Grasse and I think it's amazing".

The interview of Ha Ji-won happened when Ha Ji-won was in a local market purchasing cheese, jam and ham handmade by the sellers.

Ha Ji-won is currently residing in the village of Grasse, France for the new OnStyle show "Sister Go Go".

"Sister Go Go" productions say, "Nice Martin not only deals with the life of Ha Ji-won as a local in Grasse but even the tourism board of France and the mayor of Grasse came by to say hello".

"Actress Ha Ji-won featured in French newspaper Nice-Matin"
by HanCinema is licensed under a Creative Commons Attribution-Share Alike 3.0 Unported License.
Based on a work from this source