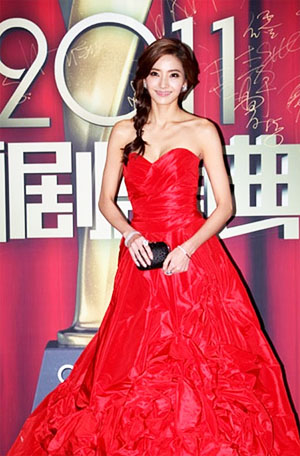 Actress Han Chae-young was awarded in various awards ceremonies in China. According to her agency on December 27, Han Chae-young garnered the Best Foreign Actress at the 2011 Drama Awards hosted by Anhui Television and Chinese Internet portal site Sina.com.

The Drama Awards selected the winner among 1,000 TV dramas that have been broadcast through Chinese satellite TV during this year, and Han Chae-young was awarded with her appearances in the drama "Boys over Flowers" and "A Man Called God". Han Chae-young had already won the award of the most fashionable entertainer of the year at the China Trend Awards hosted by Beijing TV on December 13. Han's movie "Big Deal", which is a Chinese movie, will be released in the beginning of next year.

"Actress Han Chae-young Garners Various Awards in China"
by HanCinema is licensed under a Creative Commons Attribution-Share Alike 3.0 Unported License.
Based on a work from this source