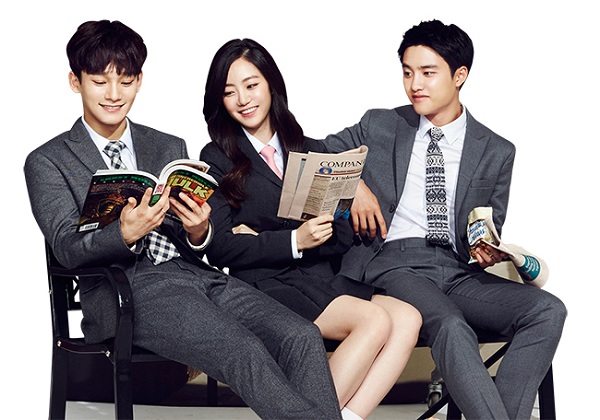 Actress Han Sung-yun showed off the fabulous chemistry with EXO members, Chen and Do Kyung-soo, while they are all dressed up in school uniforms.

In the released photos, Han Sung-yun wearing the school uniform neatly created the friendly look together with EXO members. Han Sung-yun looks pure and youthful and shows off the perfect fit of the uniform.

Han Sung-yun is a new actress, who made her screen presence felt strong for her roles, in OCN "My Beautiful Bride" and "Cheo Yong: The Paranormal Detective - Season 2", while delivering such mature acting performances for someone who's attending a high school.

She is currently starring in tvN's "Twenty Again" as Hyeon-jeong, a first year college student, who captivates the heart of viewers with her fresh appeals and innocent look.

"Actress Han Sung-yun looks fresh and youthful in school uniform pictorial with EXO members, Chen and D.O. "
by HanCinema is licensed under a Creative Commons Attribution-Share Alike 3.0 Unported License.
Based on a work from this source