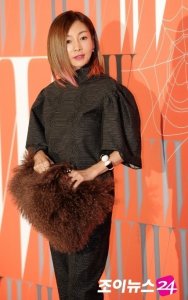 A dazzling South Korean actress Hwang Shin-hye (sometimes Hwang Cine or Hwang Shin-Hae) met with her fans in a Seoul studio on Sept. 22, 2008.

During her meeting Hwang said that she would be the host of a variety talk show "The Queen" to be aired on Sept. 23, 2008 by a local cable channel "tvN".

She will be making a comeback to the TV screen in about four years. The late-night talk show will be attended by other famous actresses and comedians.

Hwang Shin-hye (황신혜: 黃新蕙) was born in Seoul on Dec. 15, 1963. She graduated from the department of Aircraft Cabin Service Management of Inha Technical College, a junior college in Incheon, port city west of Seoul. She wanted to become a flight attendant.

But Hwang changed her mind. She made a debut as a model for a local cosmetic company AmorePacific. She also debuted in the local TV drama "Father and Son" (아버지와 아들) in 1983.

Hwang received an award of new actress from a local TV station MBC in the following year. Since then she gained her fame as "the most perfect face in the nation".

Since then Hwang has become one of the biggest TV and film stars by appearing in a number of films and TV dramas. Her numerous films includes "The Woman Who Walks on Water" (물위를 걷는여자) directed by Park Chul-soo.