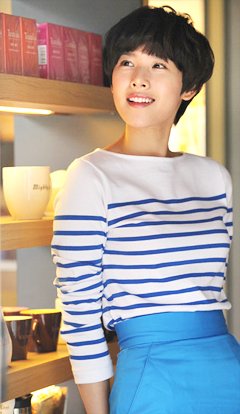 Actress Jo Yoon-hee has raced into the limelight after years spent tiptoeing around its periphery by portraying an adorable woman in the KBS 2 TV drama "My Husband Got a Family", which has been receiving top viewer ratings of between 30 and 40 percent.

"I'm so happy because I get recognized not only by young fans, but also by elderly people on the streets", the 30-year-old actress said.

Jo has been involved in show business for more than 10 years. She was already quite famous while still in high school, when she posed for fashion magazines and appeared in a music video by singer Lee Soo-young. She also made her acting debut in a TV sitcom in 2002, but it has taken her a while to make a name for herself as an actress.

"Many people ask me whether I felt anxious over the years [when my career seemed to have stalled], but I'm actually quite laid back and slow to react, so I didn't really think about why things weren't working out as I'd hoped", she said. "I think I've come this far slowly but steadily by working with whatever roles I was given".

She will next try her hand in the thriller "Conspirators", a movie set to be released next month in which she plays the tragic female lead. Jo named Shim Eun-ha as her role model, because "she was a great actress and people missed her so much after she retired. I want to be remembered like that".

"Actress Jo Yoon-hee Enjoying Life as Late Bloomer"
by HanCinema is licensed under a Creative Commons Attribution-Share Alike 3.0 Unported License.
Based on a work from this source