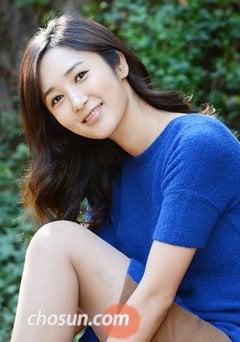 Over a decade since she appeared as the lead vocalist of a high school band in the box-office smash hit "Friend" -- a role she is still remembered for -- actress Kim Bo-kyeonghas resuscitated her flagging career and hopes to raise it to new heights.

The determined 35-year-old has returned to TV and is mesmerizing viewers with her portrayal of a ruthless career woman on MBC's morning soap "It Was Love", which began airing on Oct. 15#.

"I was not prepared for all the sudden attention I received after the success of "Friend", and I wasn't ready to become an actress at the time", she said. "But I've more than filled the gap in the last 10 years and now I'm very confident of my acting skills".

In the soap, Kim plays an ambitious woman who will stop at nothing to achieve her goals. The character plots to take a short cut to success and race up the social ladder by marrying a man of money and influence, even though she is a highly competent woman with a strong academic background.

"I sometimes feel intimidated by having to portray such an overly ambitious and vicious character", said Kim. "I've never embraced such a role before. In real life, I'm quite a soft-hearted person, but the heavy makeup they use on the show makes me look ferocious".

Kim has worked on one or two dramas or films a year, but none have garnered much attention.

"The huge success of "Friend" presented itself as something of an obstacle for me", she said. "At the time, I wasn't hungry enough to succeed as an actress, and I had little confidence in my talent. There was also a lot of pressure to do well, and I fell into a long slump as I felt confused about what direction I wanted to go in".

"However, I've since learned how to stop worrying about what others think of me and just focus on what I'm doing. With the passage of time, I've managed to overcome all of that crippling anxiety", she added.

"Actress Kim Bo-kyeong Bounces Back After 10-Year Slump"
by HanCinema is licensed under a Creative Commons Attribution-Share Alike 3.0 Unported License.
Based on a work from this source