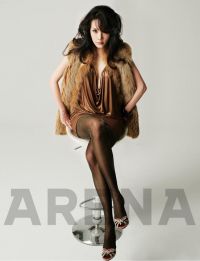 Among the many actresses in Korea, Kim Jung-eun certainly stands out from the crowd.

Starting her acting career at the age of 20, she has earned a reputation of being a friendly and familiar star, in contrast to her peers who tend to hide from the public spotlight and only appear at a handful of promotional events.

Rather than hiding her behind-the-scenes personality from the public, Kim, 34, has managed to steal the hearts of fans with her down-to-earth demeanor and natural smile, and she is aiming once again to bring back her glory days through the new drama "I Am Legend" (SBS).

Kim's recent career moves have been somewhat under-the-radar compared to the past. "General Hospital 2" (2008, MBC) failed to grab much attention, while "Lovers" (2006, MBC) just stirred more interest in her relationship with then-boyfriend and co-star Lee Seo-jin. It seemed the actress could not move past her character from the hit series "Lovers in Paris" (2004, SBS), and her image as the bubbly and likable Kang Tae-young just overshadowed whatever role she played.

Perhaps as a venture to try something completely new, Kim did something actresses seldom do: host a music show alone, which, especially one as high-profile as "Chocolate", not only requires fluent emceeing skills, but also on-the-spot reactions and strong relationships with singers.

"(Starting such a show) puts a lot of pressure on me, but I will do my best. I won't be a hostess who just wears pretty dresses and says what she is told, but will try to emcee as if I were a viewer myself", she told reporters in 2008.

"Chocolate" is currently one of the most popular music shows with guests including fellow actors, singers and even figure skating champion Kim Yu-na. Kim has kept her promise and proven to be a reliable, funny and friendly host and also a comfortable companion for artists and musicians who appear on the program.

Having proven to the audience that she can, in fact, host a show and actually be good at it, Kim has finally returned to the drama world after a two-year hiatus and, so far, the reviews are very promising.

Kim stars as Jeon Seol-hee, a daughter-in-law in one of the richest and most influential households in Korea, but who faces a divorce after her husband and in-laws restrict her interests and freedom.

This week's episode proved once again that Kim had what it took to become a drama princess, transforming from an elegant wife and main vocalist for her secret rock group to a heartwarming and caring friend.

She has managed to bring out her character perfectly, making witty remarks and showing off her signature smile and expressions. Overall, the drama has shined with her presence, without lacking in respect for her husband and his mother, donning expensive accessories and outfits, rocking the stage in black leather and an electric guitar on her shoulder, and weeping stinging tears with her friends.

"The stage where she and the other three members of the rock group performed was the perfect way to see how passionate they were in making this drama successful. It really felt like they were enjoying it", the drama production company, A story, said through a press release.

Some viewers posted comments saying she reminded them of Kang from "Lovers in Paris", while others complimented her work and said they were looking forward to another fun and inspiring character.

Although the character from "Lovers in Paris" eventually drained her, the interest and comparison may work to her advantage, as it was, in fact, one of her biggest works to date.
The new drama saw a very promising start, marking 13.3 percent in ratings, according to the Total National Multimedia Statistics Wednesday. With fierce competition from other dramas soon to be aired, viewers, and Kim, will have to wait and see if she will be able to captivate the eyes and ears of fans with her new role as a headstrong rocker with a nasty divorce down the road.

"Actress Kim to reclaim glory days"
by HanCinema is licensed under a Creative Commons Attribution-Share Alike 3.0 Unported License.
Based on a work from this source